The Kräuterzentrum, which translates as herb centre, is a new production facility for the manufacturer of herbal cough drops and breath mints. 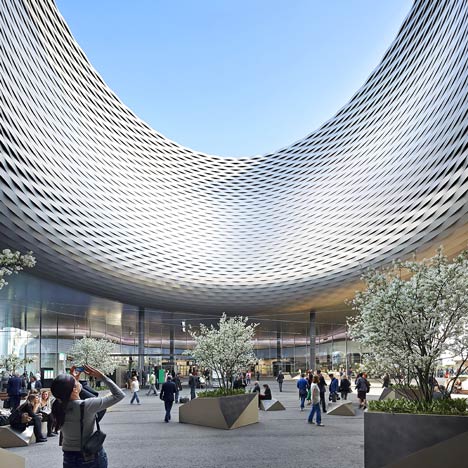 Herzog & de Meuron was first commissioned by Ricola to renovate its offices back in 1983. Since then the Swiss architecture studio has designed the company a storage building with a screen-printed facade in France and a glazed marketing headquarters, also in Laufen.

Unlike the earlier buildings, the herb centre is predominantly built from earth, extracted from local quarries and mines. Comprising a mixture of clay, marl and soil, this material helps to maintain a cool internal environment.

Each of the earth elements was prefabricated in a nearby factory by compacting the soil and clay mixture into a formwork. These were then layered up in blocks to form the walls.

"Thanks to the plasticity of the loam, the seams can be retouched, giving the overall structure a homogeneous appearance," said Herzog & de Meuron in a statement.

The building's elongated shape was designed to echo the pathways and the hedges that characterise the region. This also suits the production processes that take place inside, from drying and cutting to blending and storage.

"The new Kräuterzentrum is situated like an erratic block in the midst of a landscape dotted with conventional industrial buildings," said the design team.

"It is like a geometrical segment of landscape with its dimensions and archaic impact heightened by the radical choice of material."

The self-supporting facade is supplemented internally with load-bearing concrete pillars, while the roof is covered with photovoltaic panels that provide a source of sustainable energy.

Large round windows puncture two elevations to offer glimpses inside, and a visitor centre occupying the first floor allows guests to observe the production process from above.

Photography is by Iwan Baan unless otherwise indicated.