Nike has followed up its knitted running, soccer and basketball shoes with designs for American football boots made using the same Flyknit technology (+ slideshow). 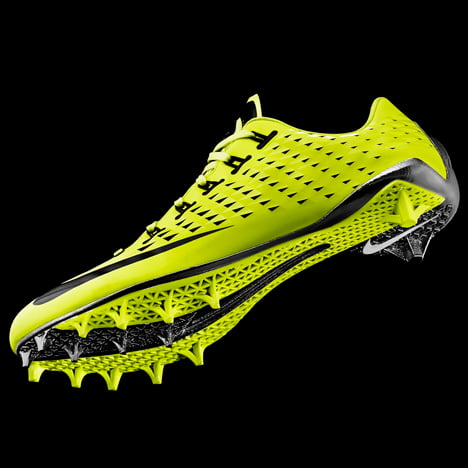 The footwear was designed to be lightweight and durable to aid athletes' multi-directional acceleration.

An overlay of the brand's new Nike Skin material – made of a breathable mesh layer bound with polyurethane plastic – is used to add extra durability in high-impact areas.

Nike Flywire cables, which tighten on impact for added support, are knitted into the uppers and wrap around the arch of each foot.

"Flywire and Nike Flyknit combine to create a second-skin, sock-like fit that adapts to each individual player's foot as well as to his style of play."

The V-shaped cleat plate is made from carbon and developed using selective laser sintering (SLS) technology at Nike's research lab.

"3D printing (SLS) revolutionised the way we design cleat plates – even beyond football," said Link. "The process gives Nike the ability to accelerate innovation and create solutions that were not possible within the constraints of traditional manufacturing processes."

The shapes of the studs are optimised to improve traction when accelerating or breaking.

The Vapor Ultimate designs follow the Magista soccer boots released in the run up to the FIFA World Cup 2014 and worn by players during the tournament.

Nike debuted the Flyknit material in 2012 with a series of running trainers.

The Vapor Ultimate cleats are now available to preorder from the Nike website.