Shai Langen created a collection of materials by combining liquid latex with calcium nitrate for his graduation project Chimera, completed at the HKU Utrecht School of Arts. 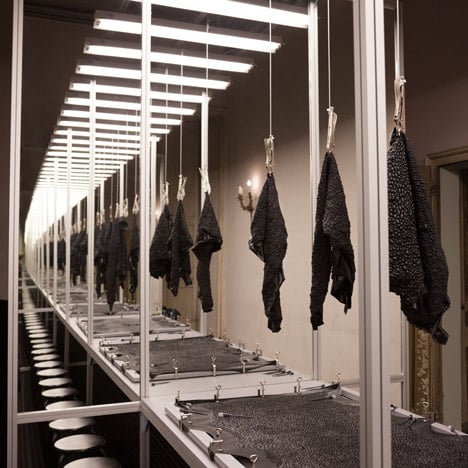 The materials were added to textiles worn to look like synthetic fungi growing over the skin.

"I've been experimenting with the shapes that form through dripping latex into the emulsion of water and calcium nitrate," Langen told Dezeen.

Calcium nitrate is used in the balloon, gloves and condom industries to create a uniform film around a mould.

"By changing the viscosity of both the latex and the emulsion I was able to create different outcomes," said Langen.

Water surface tension, ratio of calcium nitrate to water and the drying process all contribute to the properties of the finished materials.

Each piece in the collection was formed in a different thickness and using a different dripping technique.

"With the different techniques I created a collection that resembles cellular structures, slime moulds and fungi-like textures, which are created and formed like living and growing organisms," said Langen.

The first material was created by dripping latex into the emulsion so it coagulated into cell-like droplets. The drops were then applied to a full-body spandex Morphsuit.

Oppositely, dripping the emulsion onto a thin layer of the liquid latex formed a stretchy material that reveals its pattern under tension.

Dropping globs of thickened latex from a height onto a thin layer of the emulsion resulted in circular scales, which were then positioned in an overlapping pattern.

Another piece was developed without the calcium nitrate, by dipping hardware nails in latex to make glossy stalactites which were then glued onto a fabric.

The final material is a coloured, fermented dough that is smeared over the body then stretched and pulled apart by movements of the wearer.

"These textures are both organic and synthetic, exploring the boundary between living matter and non-living matter," said the Amsterdam-based designer. "Chimera plays with the concept where the organic is overgrown with the synthetic, where natural processes mutate the skin into fungi like textures."

Another designer that has experimented with liquid latex is Bart Hess, who encouraged members of the public to drip the material onto sheets of rubber for his installation in Milan earlier this year.