The sculptural ceiling decoration is made from timber battens that line the rafters, creating an ever-changing pattern of light and shadow on the walls as the sun moves across the sky.

"The delicate transition of the sun reflected on the wooden vertical lattice let inhabitants feel the riches and flux of time, and stirs their Japanese sensitivities," said architect Katsutoshi Sasaki.

Koro House is located on a plot at the corner of two roads. Its six-sided shape was designed to frame a series of small outdoor spaces between the property and the street, as well as to let light in from different directions. 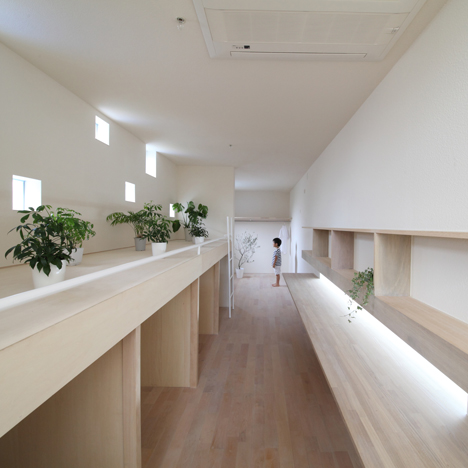 The gaps between the streets and the angular facades accommodate a family garden, a laundry drying area, a smaller private garden and a parking space with storage close to the entrance.

"The number of sides is six, which was decided according to the uses required for the garden and the study of each interior room," stated Sasaki.

The neighbourhood where the house is located was once a forest, so Sasaki added stones and cherry trees in the garden to evoke its former appearance. "This project made scenery come back," he said.

Large stone slabs create a step up to the entrance. This leads in through a small porch and kitchen, arriving at the six-sided lounge area in the centre of the residence.

Internal partitions follow the angles of the facades, creating a series of spaces around the periphery of the living room. Alongside the kitchen, these include a washroom with a shower and bath squeezed in behind a shelving unit.

There is also a master bedroom with a walk-in closet, which adjoins a smaller space that can be used as a guest room.

Opposite the entrance, a toilet and washbasin are housed in a space beneath a staircase, which ascends to a first-floor mezzanine.

The mezzanine also encircles the living room. Plywood modules run along the outer walls, divided into sleeping spaces for the children, a built-in study space, a toilet and a closet.

Slatted surfaces above the beds provide additional storage, while clerestory windows below the roof provide views of the sky and ensure natural light enters the interior throughout the day.

"I proposed a plan where we space the roof from the exterior wall, to take in the view of the sky and natural light from the whole circumference of the house," said Sasaki.

Katsutoshi Sasaki founded his architectural studio in 2008. Since then, he has completed a house for a three-metre-wide site, a triangular residence, and a house with four wings arranged around its living room.