Movie: in the first of a series of exclusive video interviews with Bjarke Ingels, the Danish architect talks us through three of his practice BIG's current projects and explains why he considers diagrams to be such an important design tool.

One of the larger projects BIG is currently working on is West 57th, a 600-apartment block in New York featuring a rectangular plan, which is pulled up at one corner to create a tower nearly 150 metres high.

Ingels says the building is an excellent example of BIG's diagrammatic design approach. 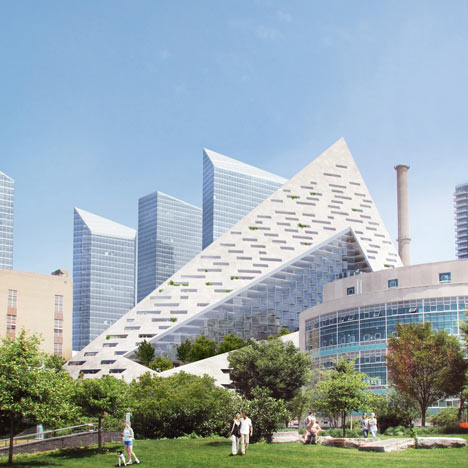 Looking at the dramatic shape of the building, people might assume it was the result of "some extensive sculpting exercise," he says. However, Ingels claims the building's form actually came about through a series of simple, logical diagrams.

He continues: "[The West 57th site] is sandwiched between a power plant, a sanitation garage and a highway. We thought, 'What they really need is a courtyard.' So we started by putting the courtyard on the site."

"But to give it Manhattan density we had to pull up the north-east corner, up to 500 feet, keeping all of the other sides low, so you still get the sun from the South and the West. You still get the views over the water."

He adds: "It has a striking silhouette. But in fact it's a series of very clear, well-informed design decisions that have created the shape."

BIG's visitor centre for Lego, "a childhood dream" for Ingels, will resemble a stack of the toy bricks rising from a public square in the company's home town of Billund.

"Denmark recently went through a structural reform so what they're actually doing is tearing down the former City Hall and building the Lego house instead," Ingels reveals. "That says much about the city of Billund!"

BIG's new museum for Audemars Piguet is shaped like a pair of intertwined spirals, seemingly coiling up from the landscape.

"[Audemars Piguet] is actually the last remaining family-owned Swiss watch company," Ingels says. " But a lot of people will know abut them because Jay-Z sings about them. There's a whole series of American rappers who like Audemars."

This is one of a series of three exclusive interviews with Bjarke Ingels. Look out for tomorrow's movie, in which the Danish architect discusses his company's $335 million project to project Manhattan from flooding.