Stairs and bookshelves wrap around a triple-height atrium inside this university library, which Danish architecture studio Adept describes as a "spiral of knowledge" (+ slideshow).

Dalarna Media Library replaces a car park at Dalarna University in the Swedish city of Falun, and sits on a sloping site. Copenhagen-based Adept chose to echo this inside by creating stairs that wind up and around the central atrium.

"The existing library was too small, and didn't have the necessary study areas, as well as limited variation of noise zones," architect Martin Laursen told Dezeen. 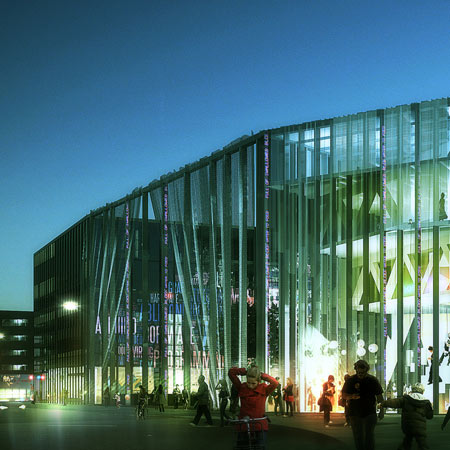 House of Culture and Movement by MVRDV and ADEPT

"This was is why we built up the new library as a classical arena, with the open, louder space in the centre to celebrate common functions and meeting spaces, and quiet zones and smaller spaces for more in-depth study and group work around the edge, with views of the hilly surroundings," he said.

Adept – whose projects include a new home for the Danish armed forces and a masterplan for the Chinese city of Hengyang – designed the central atrium as the main circulation and information zone for the library.

Steps at the lower level of the space double as theatre-style seating for concerts, while a large television can be used for screening news, events or movies.

"We tried to create a large gesture in the building, combining city life and a study environment," said Laursen.

"In this way, the building hosts not just library functions, but can potentially accommodate events such as lectures, theatre, classical concerts, and the broadcast of the Nordic World Ski Championships in 2015."

Adept also created a plaza around the building to bring some of the library's functions outside, including spaces for study and group work, and cafe seating.

"It was really important that the library reach out to the small community of Falun," said Laursen. "The intention was for the library to become a 'third space' in the city – something between private and public space."

The building's exterior is clad in Siberian larch and concealed behind a polished stainless steel screen, developed in collaboration with Danish artist Jeppe Hein.

The collaboration evolves the original concept design, which featured timber slats, so that the exterior mirrors its surroundings with broken reflections.

"The reflective screen emphasises the connection between the library and the community," Laursen said. "The double facade also protects studio spaces along the inner facade from direct sunlight, and creates a layered transition between inside and outside."

The reflective exterior of the building, which is near the university's entrance, is also designed to elevate the library as a new landmark in the city.

"As a new face for people arriving at the university, the building is designed to attract new students with a great environment, both physically inside the library, as well as digitally for long-distance students. It also provides a multi-use building to celebrates all kinds of cultural events," said Laursen.

Photographs are by Wilhelm Rejnus and Linus Flodin, unless otherwise stated.