The three volumes that make up this house in Japan by Keitaro Muto Architects stagger downwards like a huge set of stairs (+ slideshow).

Japanese studio Keitaro Muto Architects designed the Sunomata house for an extended family living in the small city of Ogaki, who had originally requested a pair of separate dwellings to accommodate different generations.

The architects instead chose to create a single property with visibly separate layers, creating some spaces that can be shared by all family members and a south-facing communal courtyard garden. 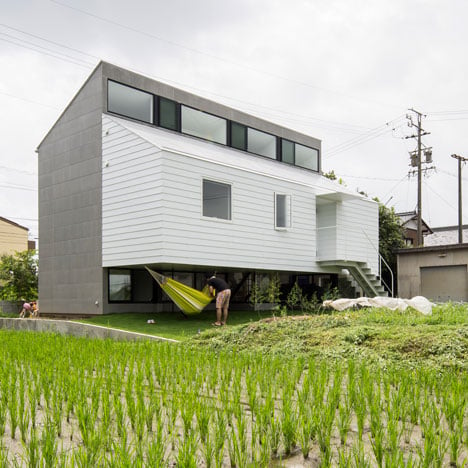 The stepped layers help to mediate between the scales of the surrounding two-storey residences and the neighbouring rice fields.

"The building steps down towards the rice fields to the west, and this has played an important role in how the internal spaces have been organised," explained the architects.

The building occupies around two-thirds of the plot, which is the same site as the family's previous home, and can be broken down into three layers of rooms. One of these is single storey, while another features a sheltered rooftop balcony, and the third extends up to a second storey.

All three offer views out to the garden, where a series of large rocks have been left in the same positions as they were when the previous building was in place. These are accompanied by smaller stones that create informal seating areas.

"Each of the internal spaces has a different relationship to the Japanese garden, whether this is visual or physical," said the team.

A sheltered parking area frames the building's entrance. A ramp runs along one edge to create a route to the front door that is accessible for a wheelchair user, which was part of the brief from the clients.

The two ends of the building accommodate the bedrooms and living rooms for the two different sections of the family. The area for the older generation is all on one level, but can be opened up into a single space if required.

The two-storey end belongs to the younger residents, and features three bedrooms upstairs. The staircase connecting the two floors extends up along the edge of the kitchen and uses the worktop as part of its route.

Communal central spaces include a study, a generously sized closet and a sun room with a double-height ceiling. There is also a traditional Japanese-style room tucked away in one corner.

The team specified a wooden structure for the build. Walls both inside and out are rendered white, accompanied by a mix of floor textures that vary between different tones of wood, tiles and concrete.

Keitaro Muto founded his studio in 2009. Other projects completed since then include a house with a black wedge-shaped facade and a residence that cantilevers across part of the garden.