Waist-high partitions divide up the top floor of this mostly windowless house in Japan, framing different activities without cutting off light to any of the spaces (+ slideshow).

Japanese architect Katsutoshi Sasaki designed the two-storey House in Hanekita for two generations of a family living in a residential neighbourhood in Okazaki, Aichi Prefecture. 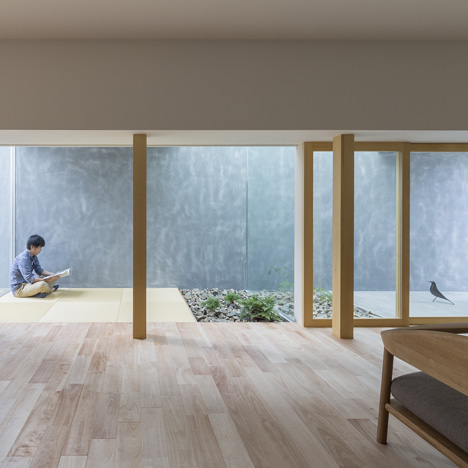 The lower level of the house has a simple layout, with an open-plan living and kitchen in the centre and narrower rooms along the edges, but the upper level was designed with a more flexible layout, divided up by what the architect calls "spandrel walls".

"In order to fulfil 13 room demands, while keeping them open to each other, the entire second floor was split into grids, bordered by spandrel walls," explained Sasaki, whose buildings also include a three-metre-wide house and a triangular house.

According to the architect, the arrangement creates a space that appears to be open-plan when a person is standing up, and simultaneously separated into different rooms when that person sits or lies down.

"It is planned to be a pillar-less space without view obstructions," said the architect. "Spandrel walls serve as loose barriers, enabling one same space to have a public and private structure at the same time, according to posture."

The house has very few windows to prevent immediate neighbours being able to see into the building. All of these are located on the lower level, so Sasaki added two large skylights to bring light into the upper level from overhead instead.

Both of these skylights match up with the alignment of the grid below. They sit directly above two indoor planters, allowing residents to grow large plants inside their home.

"Two inner gardens assume the roles of daylighting and ventilation, connecting the interiors to the agreeable exterior environment with the swaying planting and the natural light," added Sasaki, whose own office is also in Aichi.

This upper level belongs to the younger generation of the family. As well as bedrooms, spaces on this floor include a television room, a dressing room and a multi-purpose room – although the architect expects the uses to change in the future.

"The positioning of all residential rooms along the grids, except the wet area, can be altered with the growth of children," he said.

On the ground floor, the kitchen for the older members of the family forms the heart of the space, while a secondary kitchen and study area runs along one of the side wall.

Both parts of the family share a large dining space, but this can be split into two using a set of wooden sliding doors.

Floor surfaces vary between wood and concrete on this level, but the surface steps up and down to highlight the contrast between the two.

Pairs of sliding doors on both sides of the building open the interior out to a garden at the back and the street in front, where the family can look out towards cherry blossom trees and a nearby park.

"I wanted to put emphasis on the relationship between the house and the park as an everyday playground for children as well as a borrowing landscape for the house," added the architect.

Photography is by Katsutoshi Sasaki + Associates.