Donna Wilson started the design process by travelling from her London studio to her home county to run a series of workshops with local school children. She asked the children to identify colours that they felt best represented the area they lived in. 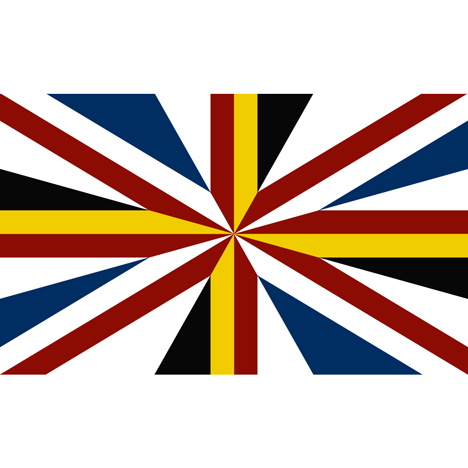 She combined these suggestions with colours she drew directly from Aberdeenshire's cultural heritage and natural surroundings to create the patterns in the material.

Tartan is traditionally woven from wool, and patterned with criss-crossed horizontal and vertical bands in multiple colours.

Different patterns are associated with certain clans, families or institutions, who wear the material as kilts or use it for bedding.

Seven colours were selected for the final design. The first is called Old Meldrum, the golden colour found in some of the Glen Garioch whisky distillery's apparatus, 17 miles from Aberdeen.

Next is Stonehaven, a dark pink referencing sweets at Aunt Betty's sweetshop in the town of Stonehaven and Aberdeenshire sunsets.

Aboyne is the green of a frosty lichen found in local woodland Ladywood Forest, and Fraserburgh is a lilac-blue symbolising the sea and sky around the seaside town.

It also includes Kintore, a forest green from the woodlands around the area of the same name; Harvest, a barley colour that reminded Wilson of autumn on the farm where she grew up; and Peterhead, a minty green from the sea spray of another local town.

"Designing a tartan for Aberdeenshire is a huge honour, especially as a Scottish designer," said Wilson. "Tartan is such an important part of our tradition and heritage, and we should never lose that. I hope to be able to make a difference to the manufacturers who will be weaving it and create something that will be a lasting symbol of Aberdeenshire."

The tartan is woven from 100 percent lambswool in a Scottish mill, which spins its own yarn directly from the fleeces and uses it to weave the textiles.

The new tartan was commissioned as part of the Be Part of the Picture project, which aims to celebrate the strengths of Aberdeenshire and showcase the region as a place of beauty, quality and innovation.

It is now available by the metre and as two scarves – a classic design with fringed ends, and a fox-shaped scarf which is hand-embroidered in Wilson's London studio.

Wilson often uses wool in her designs and has previously created patterned pouffes and a collection of knitted characters with the material.