Industrial design studio Priestmangoode has released plans for an aeroplane cabin interior with room for every passenger to store hand baggage in the overhead compartments (+ movie).

Fights over luggage room are common on many aeroplanes, where overhead compartment space is at a premium. Late arrivals regularly have their larger carry-on items placed in the hold because space has run out in the cabin. 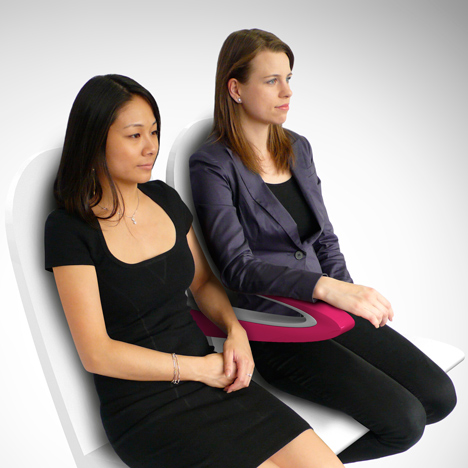 Unveiled at the Farnborough Air Show in England yesterday, Priestmangoode's aircraft interior for Brazilian aeroplane manufacturer Embraer aims to relieve this issue by increasing the capacity of the overhead bins by 40 per cent.

As a result, each passenger would be able to fit one piece of airline-standard carry-on luggage into the bins when lifted in wheels first.

"Improving carry on luggage capacity was crucial," cofounder Paul Priestman told Dezeen. "During the research process, we spoke to air stewards about the complaints they often hear from passengers, and one of those was passengers not being able to have their bags in the bin right over their seat."

Legs have been removed between the seats so larger luggage items can be stored beneath the seats.

"Our ambition from the start was to enhance the passenger experience, as well as improve efficiency and maintenance," he added.

The studio's single-aisle design for the E-Jets E2 features two seats each side throughout the cabin.

To give passengers more personal space, the team integrated individual power supply units (PSU) – which currently have a patent pending – above each seat.

This would allow each passenger to control their own lighting and air conditioning without disturbing their neighbours.

"Our aim was to increase personal territory and enable passengers to reclaim their own space," said Priestman.

Staggered first-class seating offers more privacy and allows the same seat tracks to be used throughout the plane, reducing the weight.

This also means that airlines can reconfigure the interior to suit demand more easily.

Window openings have been designed to appear wider, creating the feeling of more space.

"The inside windows are larger than the outside windows, which creates a tunnel like vision and gives the appearance of bigger windows overall," explained Priestman.

The lavatories include hand rails integrated into the walls and a mirror set back to optimise space.

A full-scale mockup of the design was shown at this year's Farnborough Air Show, which continues until 18 July.

Priestmangoode previously designed the interior for the Embraer Lineage 1000 executive jet. The firm also created the first-class cabin for Brazilian airline TAM, which includes sofas and wardrobes, and a conceptual airline seat with a detachable wheelchair.