Indian company Lucid Design has created a conceptual "bike in a bag" that would quickly dismantle into parts to fit into a backpack (+ movie).

The full-size Kit Bike by Lucid Design would be assembled from a series of 21 parts that twist and lock together. 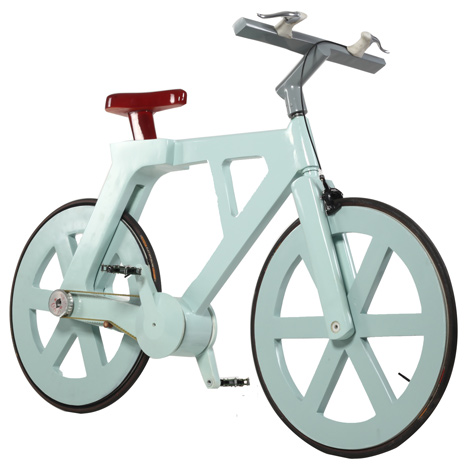 "Conventional bikes are awkward in every way except when you ride them," the company's creative director, Amit Mirchandani, told Dezeen. "The Kit Bike was designed to make problems of shipping, traveling with and commuting with a bike, a thing of the past."

Hollow aluminium tubes would make up the frame, locking together via a series of joints that would twist together using a rotating mechanism and be secured with a key.

"The entire bike can be assembled or dismantled from one side making the process extremely simple and quick," said Mirchandani.

The minimal white, diamond-shaped frame would attach to the steel wheel hubs on one side, so the bike could be assembled or disassembled while rested against a wall.

"It's simple, minimal and cool, unlike folding bikes that tend to be complex," Mirchandani said.

Leather is proposed for the seat and the handlebar grips would be made from cork.

The parts would pack away into a circular leather backpack, which features two compartments on each side for the wheels and a central section for the other components.

Lucid Design currently has no plans to produce the bike, but may consider it in the future.

Designers often create new visions for cycling, with recent ideas including a high-tech version of the first pedalled bicycle and a "smart" bike that gives directions with flashing lights and vibrating safety alerts.