A year after opening as an art space, the rooftop of Modernist architect Le Corbusier's Cité Radieuse building in Marseille is hosting an installation of mirrors and coloured glass by French artist Daniel Buren (+ slideshow).

Daniel Buren's Défini, Fini, Infini is an installation for the MaMo contemporary art project led by French designer Ora-Ïto, who transformed the rooftop into an arts space last year. 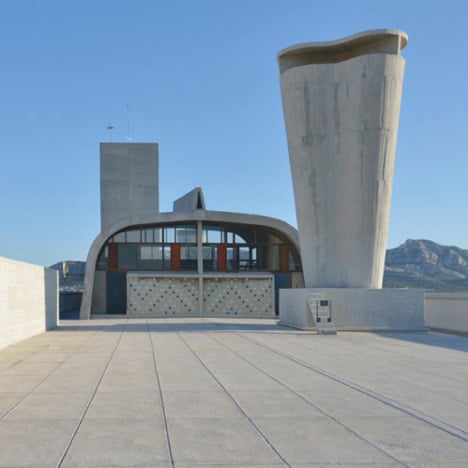 The rooftop was originally intended as an outdoor gymnasium for the residents of Cité Radieuse, the first building in Le Corbusier's Unité d'Habitation series of housing blocks.

Buren installed a set of seven previously unseen works around the rooftop, responding to the geometric concrete forms on top of the 1952 building.

The large window beneath the canopy has been covered over with multicoloured translucent sheets, adding to the red and blue stained glass sections within the frame.

At night, the light inside shines through the colourful screen and is reflected on mirrored surfaces across the space.

A row of alternating angled panels sits along one edge of the roof. Sections facing upward are mirrored to reflect the sky, while downward-facing surfaces are chequered black, white and red.

The floor is dotted with a series of small square podiums, which have coloured tops and black and white striped sides.

Mirrored walls surround the base of the sculptural chimney facing a screen of triangular panels, which stand atop a small flight of concrete steps.

The installation is in place until 30 September. In the same building, Apartment N°50 has been given a colourful refit by designer Pierre Charpin and is also open to the public over the summer.

Cité Radieuse was damaged by a fire in 2012.

Photography is by Sébastien Véronèse.