Pierre Charpin installed furniture and artwork at Appartement N°50 as part of a series of installations commissioned by owner Jean-Marc Drut, which has included refits by the Bouroullec brothers and Konstantin Grcic.

Cité Radieuse was completed by Le Corbusier in 1952 as the first of his Unité d'Habiticion series of Modernist housing estates.

"The Cité Radieuse is an iconic building, but the inside of the apartments is largely unknown to visitors," Drut told Dezeen. "Even if full size reproductions have been exhibited in various museums around the world."

Although tourists can explore the public spaces and rooftop of the building, they don't usually have access to the private apartments to experience their layout and interiors. 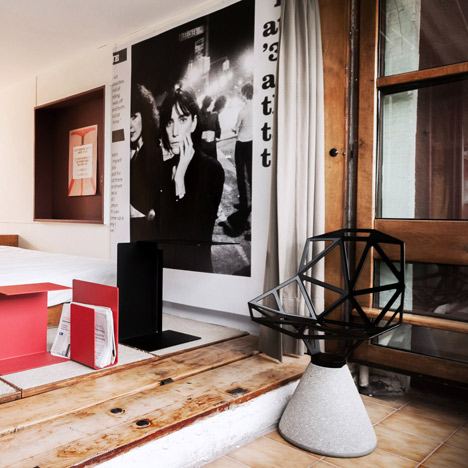 "I thought it was a shame that most visitors, coming from all over the world, could experience all these parts of the building, without being able to have an inside view of the apartments," said Drut.

The apartment includes original furniture by Modernist designers Charlotte Perriand and Jean Prouvé, as well as by Le Corbusier himself. With each of the installations, Drut wanted to reinvigorate the interior in keeping with these pieces and bring it up to date.

"I could have kept this apartment like a historical display with Perriand, Prouvé and Corbusier furniture, but I felt more interesting to re-activate it with contemporary designs and see if it was still relevant in the 21st century," he said.

Charpin's refit includes his own colourful glassware, ceramics and furniture, arranged around the space to look as natural as possible.

"Pierre Charpin has brought plenty of colours and joy to the apartment," said Drut. "He is playing a lot with the strong light of the Mediterranean, with his amazing glass vases for Galerie Kreo and Venini for example, and he plays with the architectural lines."

The designer's linear drawings are mounted in bright frames, sized according to the Modulor measurement system that Corbusier defined and used throughout his work.

The apartment was in its original condition when Drut took ownership. He asked British designer Jasper Morrison to complete the first installation in 2008. Morrison then chose Ronan and Erwan Bouroullec for the next iteration in 2010, who in turn selected Grcic for 2013.

Each designer has had free reign over the design, providing they don't change the colours of the walls or alter any of the existing furniture.

"It is all about transmission and sharing a mutual passion and interest," said Drut. "There is no brief, no constraints, apart from the obvious respect for such a place."

Charpin's installation will be in place until 15 August, while the apartment remains occupied.

The rooftop of Cité Radieuse was opened to the public last summer as a contemporary art space masterminded by French designer Ora-Ïto. The building was damaged in a fire in 2012.