Le Corbusier's Villa Savoye and Mies van der Rohe's Farnsworth House are among the five iconic houses put together from blocks of colour and thick outlines in this short animated film by Italian designer Matteo Muci.

The Iconic Houses movie focuses on five of the 20th century's most famous residences and transforms them into colourful illustrations that glide onto the screen, one piece at a time.

Matteo Muci, who works in both graphics and product design, came up with the idea after trying to find a way to combine his growing fascination with the great architectural masters and his love of illustration. 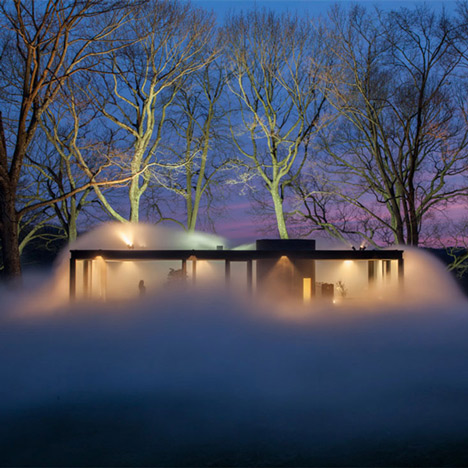 "Having to make a video of only a few minutes I had to make a choice between many works," he told Dezeen. "I think I have chosen the ones that can really be defined as masterpieces of design, the ones that even a layman can recognise and appreciate."

Villa Savoye is the first house in the two-minute animation, shortly followed by the Rietveld Schröder House by Dutch architect Gerrit Rietveld. Farnsworth House is up next, followed by Philip Johnson's Glass House and Fallingwater by Frank Lloyd Wright.

"Fallingwater is my favourite," said Muci. "I believe that both the structure and the context render it as one of the most representative works of modern architecture."

Muci created the images using Adobe Illustrator, then animated them using Adobe Flash. The finishing touch was a jazzy score that the designer composed himself.