Junya Ishigami and Svendborg Architects have won a competition to design a "symbol of peace" for Copenhagen's harbour with plans for a monumental cloud-like building with a boating lake inside.

The House of Peace, or HOPE, was designed as a collaboration between Japanese firm Junya Ishigami + Associates and Danish studio Svendborg Architects, to create a new architectural landmark at Copenhagen's Nordhavn harbour.

Described by the designers as "a journey of the senses" that can "never twice be experienced as the same", the building is imagined as a huge cloud resting over an artificial island, with a pool of water instead of a floor. 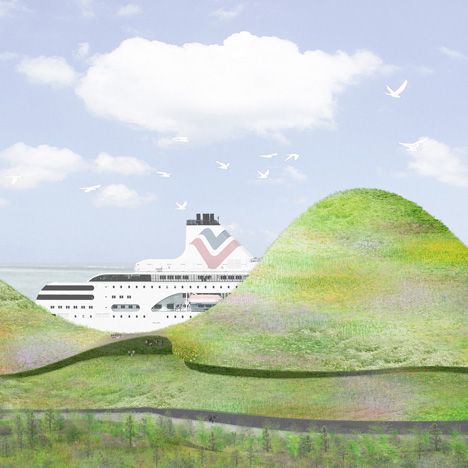 Visitors will be able to board circular boats to move through the cavernous interior, intended to look like lily pads floating over a pond.

"House of Peace creates an environment where people can open up to think of peace. It takes one back to the purity of being – ready to embrace the world," said the team in a statement.

The competition was launched by non-profit organisation the HOPE Foundation and is intended to provide a physical manifestation of the work done by the United Nations and other international peace organisations.

"[The] winning proposal meets every bit of the vision of our project," said HOPE Foundation chairman Morten Langebæk, who also works as an architect and designer.

"This is nothing less than an architectural masterpiece. A fascinating, poetic building and an obvious symbol of peace; at the same time a building, a sculpture and a symbol."

According to Langebæk, the space will be one that people will want to visit again and again. "The work is from the outside an expression of a snow-white cloud that seems to float on the water. In its own way it brings nature and the countryside into the city and stands as a positive and welcoming landmark that is obviously related to the concept of peace."

"The inside of the building is carefully designed to exploit the water and its movements, reflections and colour, light and shadow. The result is deeply fascinating and at the same time peaceful," he said.

The House of Peace will be constructed in the centre of the Nordhavnen, alongside the recently completed United Nations regional headquarters designed by 3XN, and will be one of the first structures visible to those travelling to Copenhagen by sea.

Other projects proposed for the Copenhagen harbour include a series of artificial islands accommodating wildlife and water sports. The city also recently opened a new pier made up of undulating bridges and promenades.