Vertical strips of travertine stone cover the facades of these apartment buildings in the Swiss village of Crans-près-Céligny by Group8asia, altering the appearance of the structures when viewed from different angles.

Named Striped Living, the two buildings were designed by architecture firm Group8asia to join three others that have been completed as part of an evolving masterplan for the village centre, which will eventually see a total of 15 blocks constructed in close proximity to one another. 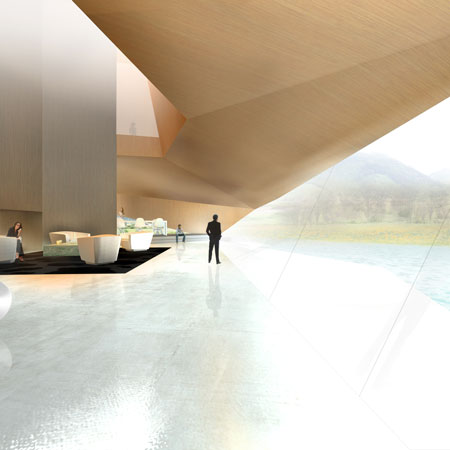 Containing a total of 14 rental properties that range in size from studios to six-room apartments, as well as a nursery, the buildings were designed to respond to their densely developed context while referencing the village's traditional houses and farm buildings.

By installing the stone fins across the facades, the architects were able to restrict views into the buildings from the surrounding public spaces and to reference the material palette commonly used in the region.

"The vertical cladding addresses the issue of visual proximity. The masterplan allows buildings to be very close to each other, so a facade solution was required to solve this issue."

The depth of the narrow stone strips creates a dynamic optical effect. From the front, the surfaces seem open and transparent, but when viewed from an angle they appear more solid and monolithic.

In places, the vertical fins partially cover windows, while elsewhere they are interrupted by openings for further windows and balconies that are positioned to make the most of views towards the countryside.

"Voids and openings to the landscape are mainly placed at the corners to create terraces," said Du Pasquier. "This also allows sculpting of the volume and allows us to get out of the block effect."

Each of the apartments has a unique floor plan, with the irregular positioning of the openings on the facade revealing the variety of internal spaces.

"Different floors propose different layouts, so the facades follow the same logic and allow you to think you have your own little villa, even when these houses are for renting," added Du Pasquier.

Asphalt surfaces surrounding the buildings provide play areas for children, which also accommodate wooden platforms that can be used for casual seating.

Circulation areas inside the buildings feature cast concrete staircases that rise through openings in the textured concrete floors of the levels above.

Windows enable natural light to reach the corridors and lobbies at the centre of the buildings, with pebble-floored gaps providing visual separation between each of the individual residences.

Apartments feature wooden floors that contrast with stark white walls and fitted cabinetry, creating a neutral backdrop for the tenants to customise.

Photography is by Régis Golay.