A mixture of colourful tile, stone and metal claddings give a playful character to this residential development in Utrecht, the Netherlands, designed by local practice Space Encounters in collaboration with Mees Visser and Zecc Architecten.

Space Encounters designed eight buildings for the scheme in the Wisselpoor district, forming part of a masterplan by practice Studioninedots to transform the former railway area into a housing district for developer Synchoon.

Ranging from apartment blocks to single-family houses, Space Encounters sought to "blur the distinction between the whole and its parts," creating an urban presence through a diversity of materials and finishes informed by traditional Dutch terraces.

"While the housing designs of Meet Visser and Zecc are quite restrained in terms of material and colour palette, the architecture of Space Encounters could not be more expressive," explained the studio.

"This was achieved through a refreshing take on traditional Dutch terraced houses by using different, unconventional materials for the separate plots assigned to the office."

Across a total of seven blocks of three-storey terraced townhouses, the practice used a similar layout, with long, narrow plans that purposefully avoided the use of corridors to create an enfilade of spaces from the entrances out to gardens at the rear.

On the ground floor, kitchen and dining areas look out onto new streets lined by small seating areas, while a living space overlooks the more intimate, courtyard-style spaces created at the centre of each urban block, with bedrooms on the floors above. 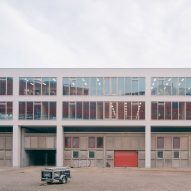 "Most of the houses are 'twins', while there is one strip of three houses and one strip of four houses...all houses, apart from the apartment block have, in essence, the same floor plan layout, which unifies the whole," explained the studio.

"The strip of three houses could be considered a new typology, in which the bayonet floor plan introduces a diagonal movement in the floor plan and allows for the playful window composition in the facade."

Each block features its own distinctive finish, ranging from grey concrete blocks, aluminium panels, Ceppo di Gré stone and yellow and red tiles, setting each apart from its neighbours.

The larger apartment block features a gridded facade of windows that are subtly varied in size, and is finished in nacre or mother-of-pearl tiles to make it the "shimmering pearl" of the neighbourhood.

Previous projects by Space Encounters include an office building in Amersfoort raised on stilts above a brick warehouse, and a real estate office in Amsterdam divided by white columns and translucent curtains.

Photography is by Lorenzo Zandri and Marcel van den Burg.