The crisp white-stone facades of this luxury apartment block in Bucharest by local studio ADNBA are punctured by large recessed windows that help to reduce the building's overall massing so it matches the scale of its urban context.

The Londra Housing development was designed by ADNBA for real estate firm Forte Partners, which invests in and develops high-end residential buildings and offices in Romania.

The project on Londra Street occupies one of the few remaining lots in the historic Dorobanti district, where 19th-century villas stand alongside more modern buildings including communist-era housing blocks.

The five-storey structure contains seven apartments featuring a high standard of finishing intended to attract buyers at the premium end of the market.

The massing of the building is intended to complement the scale of the surrounding urban context, creating an imposing yet permeable volume that contributes to the high-end feel of the project.

"The space-structure gives the urban presence of the building a weight that counterbalances the extent of the glazed surfaces," said the architects.

"The retraction of the central span and the asymmetry of the cornice are aimed at dividing the house into two volumes closer to the neighbouring scale."

A recessed section at the centre of the building accommodates the stairwell and separates two wings at either end that contain the residential units.

The solidity of the simple structure is expressed in the rigid grid-like arrangement of the facades, which are clad entirely in white stone to enhance the robust aesthetic.

To mitigate the overall mass of the block, large windows and loggias are carved into the monolithic volume, introducing a sense of transparency that contrasts with the stone surfaces.

The upper storeys are set back to create a sense of the building dematerialising as it extends up to meet the sky. This effect is accentuated by windows on the end facades that increase in size on the higher floors.

The expansive glazed surfaces ensure every apartment feels bright and enjoys views of the surrounding neighbourhood. The windows also help to create a visual dialogue between the building and the street.

Terraces incorporated on different levels on either side of the block provide private outdoor spaces, while a large communal roof terrace looks out across the city skyline.

The interiors of the apartments feature premium materials including terrazzo, wooden parquet and marble-lined walls that contribute to the luxurious feel.

Photography is by Cosmin Dragomir unless stated otherwise. 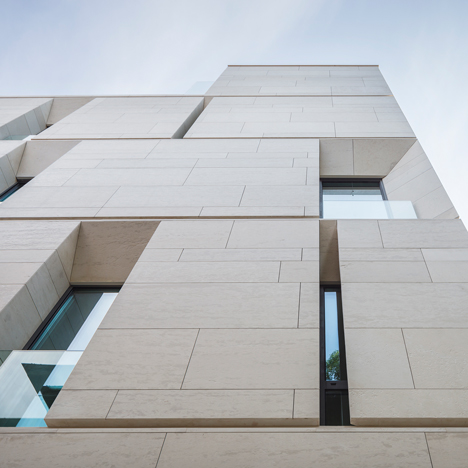