Representatives of the now defunct London Organising Committee of the Olympic Games (LOCOG) have agreed a settlement for an undisclosed amount with Atopia, the New York-based firm who claimed to have created designs similar to Heatherwick's iconic cauldron while working as a design consultant for the games between 2006 and 2008.

A statement published by liquidators Moore Stephens said that LOCOG acknowledged that Atopia had developed designs for the games, including concepts for a temporary structure known as the One Planet Pavilion.

It goes on to describe one of the concepts developed by Atopia as having five features, including "live-time construction" during the opening ceremony and the pavilion "being made from 200+ flower shaped forms, one for each of the  participating nations".

But it did not say that the company accepted any claims of copying or authorship over the design of the Olympic cauldron, which was created by British designer Thomas Heatherwick and became one of the iconic symbols of the games. 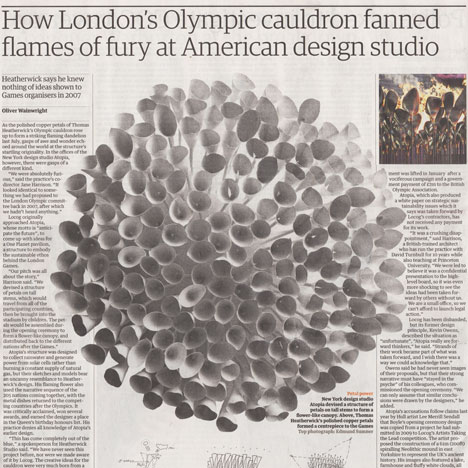 Heatherwick has repeatedly rejected all suggestions that any of the design work done on the cauldron was influenced by earlier work for LOCOG.

"I knew nothing of this settlement until today and it has no implication for any of the creative team," said Heatherwick. "As we've said before, the design process was categorically our own, from start to finish."

His design is due to go on display in a dedicated gallery space at the Museum of London on Friday.

Atopia first went public with claims that its work had been used uncredited at the Olympics last year.

Images were published by The Guardian showing a structure designed by Atopia with a cluster of petals on long, slender poles that appeared to look strikingly similar to the cauldron design by Heatherwick Studio, consisting of 204 copper touches shaped like "petals" that rose up to form a single flame.

The claims were rejected by Heatherwick and artistic director of the London 2012 opening ceremony Danny Boyle. 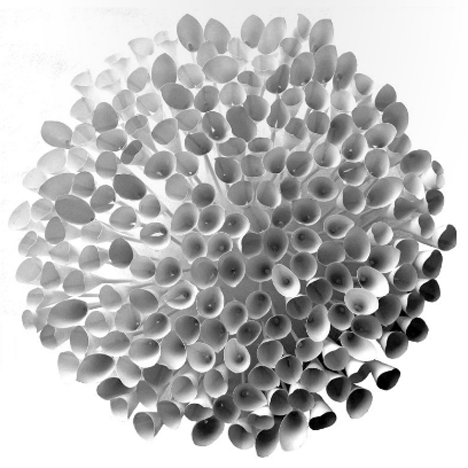 "We never claimed to be designers of the cauldron" says Atopia

"We studiously avoided any of Locog's development work prior to our involvement precisely so that we could create an original ceremony, beholden to no one and based on what we saw as the best of British culture," said Boyle in a new statement. "It would beggar belief if we had taken, unacknowledged, an idea for so fundamental a part of the show from an American company."

"Neither work by Atopia or anyone else played any part in the briefing I gave to Danny Boyle and Thomas Heatherwick at the beginning of the process to create the Olympic and Paralympic Cauldron," added Martin Green, former head of ceremonies for London 2012. "Danny and Thomas have far too much integrity and talent to require using other people's ideas in this way."

Jane Harrison and David Turnbull of Atopia said they were "relieved" that LOCOG had settled.

"Following the London 2012 Olympics we decided to take steps to seek recognition from LOCOG for the strategic design work we produced between 2006 and 2008," they said. "We understood that this decision would be emotionally risky, time-consuming and costly to ourselves but we considered it to be essential in order to establish certain principles and rights with respect to our work and insist upon acknowledgement for that work."

"A key component in the way we work is developing design scenarios and writing design-based narratives for clients that allow them to imagine possibilities years ahead of time and catalyse thinking within their organisations to deliver socially engaged innovation."

"We are relieved that this lengthy process, with the support of Simons Muirhead & Burton has resulted in a settlement and public recognition for our One Planet Design Scenario and Framework for a Sustainable Olympics."

In an earlier statement after the claims were first published, Atopia said it had never accused Heatherwick of plagiarism. "We have never claimed to be designers of the cauldron in spite of claims in the press," said Atopia, instead insisting that its "narrative scenario" had inspired LOCOG.

Atopia said it would make a donation from the settlement to its own non-profit organisation, which would support work in sport development for Africa.