News: OMA has won planning permission to transform a 19th-century structure in Paris into a gallery and studio for contemporary artists, commissioned by French department store Galeries Lafayette.

The Galeries Lafayette Foundation will take over all five storeys of an old industrial building in Le Marais – one of Paris' oldest neighbourhoods – just east of the Centre Pompidou.

Rem Koolhaas' firm plans to restore the U-shaped building back to its original condition and complement it with a new exhibition tower, which will occupy the existing courtyard. 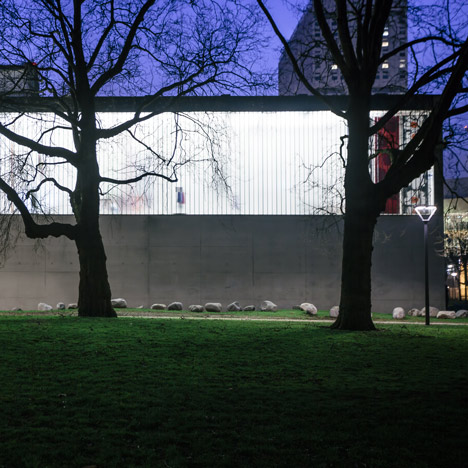 The tower will feature two sets of motorised levels that can be split up to create a total of four mobile platforms. These will be able to move up and down to align with different floors, allowing exhibitions to extend beyond the gallery walls.

"The mobile floors offer a new curatorial dimension, complementing the traditional use of the preserved structure," said OMA in a statement.

The building's basement will become an art production centre, described by the architects as the "heart of the site", while the ground floor will be dedicated to public programmes, creating a route between Rue du Plâtre and Rue Sainte-Croix de la Bretonnerie.

"The architectural concept was derived from the need for flexibility – a common requirement for cultural institutions – and from the restrictions applied to the site by the city heritage authorities," said OMA.

Due to open in the autumn of 2016, the 2,500-square-metre Galeries Lafayette Foundation building will encompass sculpture, ceramics, fashion, design and performing arts, with a focus on creation, innovation and research.

OMA, whose best-known projects include the Shenzhen Stock Exchange and the CCTV Headquarters, is also currently working on galleries in Moscow and New York.