The overlapping layers of this house by Japanese studio UID Architects form terraces that extend inside and living rooms that open out to the garden (+ slideshow).

Cosmic House by Fukuyama-based UID Architects features a mixture of enclosed and open spaces across two levels, designed to create an intimate relationship with the setting, and the daily and seasonal changes that take place there. 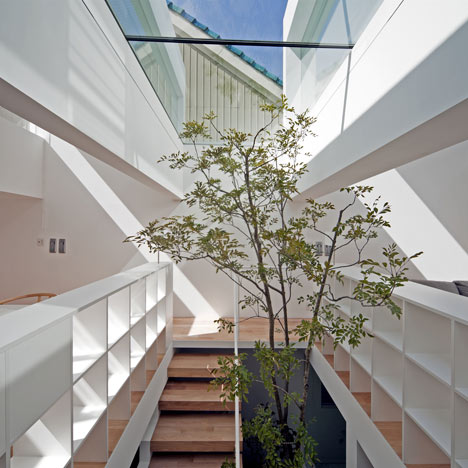 "The ever-changing nature of humans, plants, land and climatic conditions reminds us that nothing stays the same forever," explained architect Keisuke Maeda. "My interest lies in spaces where one may perceive these changes, which are like the heartbeats of nature, in the course of daily life."

UID – whose other projects include a house with a facade that frames a courtyard and a circular house partially sunk into the ground – covered the rooms of Cosmic House with a series of rectangular arches, enclosing some with glass and leaving others open to create terraces.

"Instead of gathering up a crowd of spaces within the site using walls and roofs, the design involves a domain generated by screens, like clouds, that shield sunlight and moonlight," said Maeda.

Particular attention was paid to the borders of the house, where soil and pebbles extend from the garden into some of the rooms. Frameless floor-to-ceiling glazing has also been used throughout to blur the boundary between indoor and outdoor spaces.

"In this project, the focus is on the borders, and the interaction with the nature that surrounds this hilly site," said Maeda.

Rather than design the house with a traditional layout around a single living space, UID have created a series of communal and private areas around the edges of the site, further connecting the house with its setting.

The ground floor has two bedrooms at opposite ends of the house, one with its own bathroom. It also features a kitchen in the centre, a playroom and living room, and two dining spaces with sunken seating – one indoors and one outdoors.

Upstairs, the house has a second kitchen with an informal dining area, as well as a living room and bathroom.

Stone flooring has been used throughout the house to tie in with the pebbles and rocks surrounding it.

The rectangular arches surrounding the building enclose terraces at the edges, which have been designed to highlight different sounds, scents, light and breezes around the site.

"The screens that flow from east to west not only work as eaves that shield direct sunlight during summer, but also highlight the diversity of the space through the seasons," said Maeda.

The house is built from steel and reinforced concrete, and features a self-cleaning photocatalytic coating that allows the exterior to retain its clean white appearance.

Photography is by Hiroshi Ueda.