The two largest available cranes in the Netherlands were used to hoist up this house by Dutch architects Tim Piët and Jos Blom so it could be transported by boat to a hard-to-reach waterside site (+ slideshow).

Tim Piët and Jos Blom, who previously went under the name FLATarchitects, were asked to design a holiday house for a site on the banks of Pikmeer lake in Friesland, the Netherlands.

"One of the consequences of the unique location at the edge of the lake was that the building site was hard to reach for construction. Therefore we decided to build the house elsewhere," said the architects.

"This way it became possible to assure a high quality construction."

Named KHM26, the house was entirely constructed off-site before being shipped to its intended location on the back of a boat. 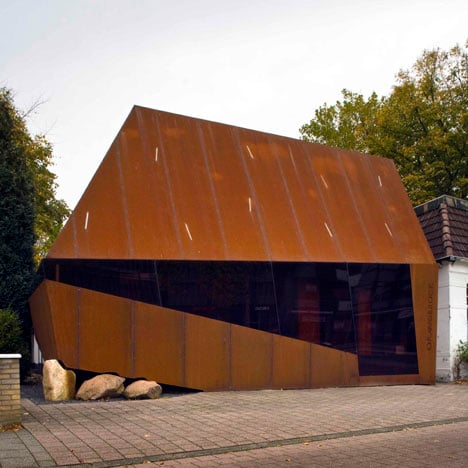 "To be honest it wasn't as much a problem as an opportunity," Blom told Dezeen. "The fact that the complete house could be built on a location under close to perfect conditions made it possible to go with a less conventional building method."

The core of the house was built from concrete, giving it a solid and stable base. A pre-weathered metal shell made from Corten steel, welded into one single piece, was added around this.

According to Blom this could never have been installed on site, as the insulation of the hood and its water-tight sealing needed to be precise to function efficiently without compromising the desired appearance.

Once complete, transportation of the house took two days. The two cranes were able to lift weights up to 260 tonnes, so the 240-tonne building caused no problems.

"In the end we didn't even need to use special lightweight materials," said Blom.

The lowest level of the three storey building is set below ground level and acts as a foundation. This floor accommodates a series of three rooms that can be used as bedrooms.

An open-plan living and dining room stretches across most of the ground floor, meeting a kitchen tucked into one corner. This floor features large expanses of glazing, offering residents views of the surrounding lake and meadows, and opens out to a protected terrace.

The upper level has a slanted ceiling that follows the profile of the roof. A large en suite bedroom leads out to a roof terrace, while a multi-purpose hallway room is completed by a dormer window.

Photography is by Arend Loerts.