A narrow white wall appears to hover around the perimeter and garden of this house and atelier – the third project on Dezeen this week by Japanese office UID Architects (+ slideshow).

UID Architects – the Hiroshima-based studio that recently completed a house framed by rectangular arches – completed Atelier-Bisque Doll in 2009 on a sloping site in the city of Minoh, just north of Osaka. 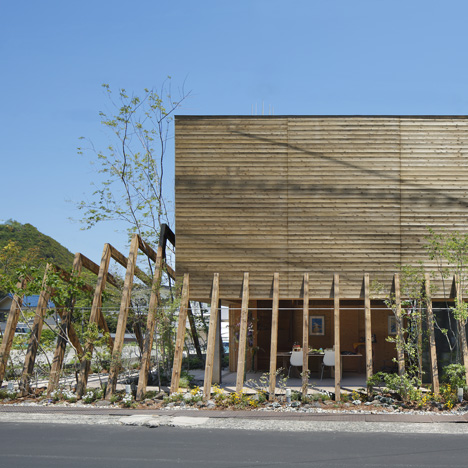 Rather than enclose the rooms with solid walls, the architects wrapped the building in three rectangular structures, described as "belts", which are raised above the ground to create glazed sections at the top and bottom of some of the rooms.

One of the rectangular structures forms the outer fence, which extends from higher ground at the back to lower ground at the front, creating the illusion that it is floating above the street.

From inside, it offers partial views of the surrounding area, in order to make the building feel more expansive than its footprint.

"A simple operation of overlapping belts obscures site boundaries and formulates a relationship to the site and the neighbourhood," said architect Keisuke Maeda.

The building is occupied by a couple – one of whom is a doll artist – and it features a doll-making atelier at the front, with a workshop and meeting space, toilet, kitchen and a raised terrace facing the street.

"The request was for an atelier that can be used as a gallery, and at the same time function as a doll-making studio," explained Maeda. "Additionally, it should be a space where the owner's friends, who are often invited, can gather."

The house is built behind the atelier, on higher ground at the back of the site. It features a living room and traditional Japanese tatami room at one end, a kitchen-diner and bedroom at the other end, and a bathroom and toilet in the middle.

An S-shaped path winds from the front of the atelier to the back of the house, cutting a passage between the two structures. It is designed to offer the occupants and visitors a variety of views, and indoor and outdoor spaces as they make their way through the site.

Built-in furniture has been used instead of walls to separate spaces inside, and resin flooring features throughout so that the rooms appear to flow seamlessly from one to the other.

Frameless glazing and skylights have been placed around the building to offer views of the sky and surrounding trees, and bring light into the centre of the house.

Photography is by Hiroshi Ueda unless otherwise stated.