Writer Geoff Manaugh and designer John Becker have imagined a scenario in which genetically modified bees could be trained to print detailed concrete structures rather than produce honey (+ interview).

Geoff Manaugh, former editor-in-chief of tech website Gizmodo, and his friend John Becker came up with the idea to use bees to "3D-print sculptural forms and architectural ornament into existence through the help of geometric formwork."

The bees would act as "architectural printheads" – modified with synthetic biology so their honey-making glands produced concrete, which could be used to create structures from architectural details to full buildings.

"The ultimate goal would be to produce entire, free-standing architectural forms, but, in the meantime, the bees would be able to construct or repair statuary, architectural ornament, building details and more," Manuagh told Dezeen, after publishing the project on his site BldgBlog. 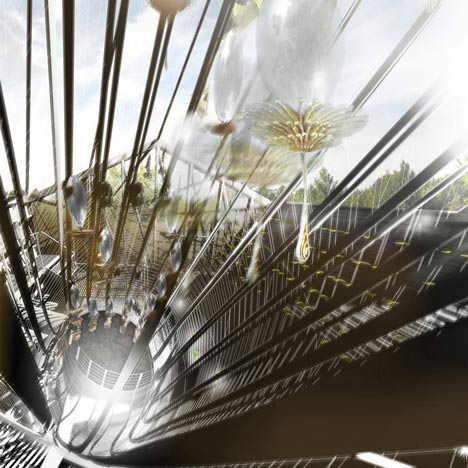 London Without Bees by Ben Kirk

Placed into moulds, scaffolds or formwork, the bees would be encouraged to build specific shapes, in a similar way to how designer Tomas Libertiny trapped the insects in a vase to create a honeycomb in the shape of the glass container.

"By raising a colony in a cast you could guide the growth and formation of the hive," Becker told Dezeen. "They could be used to repair damaged structures, create sculptures, or if let loose create gorilla architectural ornament – printing unsolicited additions in urban and natural landscapes."

Using precedents such as the US military's project to make goats produce weapon-grade spider silk and MIT's pavilion woven by silkworms, the duo thought the idea wasn't completely out of the question.

"Purely in terms of this sci-fi narrative John and I were cooking up, it didn't seem outrageous to suggest that bees could be genetically modified to produce a concrete-like adhesive substance, rather than just honey," said Manaugh.

"There is already a species of bee native to New England that naturally produces a cellophane-like polymer that could, in theory, be used as an industrial alternative to plastic," Manaugh explained.

The duo also thought about the consequences of manipulating nature, and predicted that the bees would inevitably escape into the wild and start sporadically printing onto existing infrastructure.

"If they escaped they could redesign the facades of our buildings or the canopy of our forest," said Becker. "This could be both wildly exciting and lead to unanticipated breakthroughs in construction and form-making, as well as create enormous hazards and consequences for the natural and built world."

"You could think of it as a world infested with rogue 3D-printers or concrete glue guns gone wild," Manaugh added.

However, Manaugh stressed that the project is not a serious suggestion to modify the world's honey bees and is an observation of a possible future situation.

"Our goal was simply to illustrate the spatial or architectural possibilities that would emerge from something like this," he said.

Dan Howarth: When did you start thinking about working with bees?

Geoff Manaugh: We got onto the topic a few years ago, actually, when a handful of ideas unexpectedly overlapped.

It was around the time that a 600-year old stone beehive was found built into the masonry of Rosslyn Chapel up in Scotland, so we started speculating about what it would mean if those bees were sort of like the cranes in Archigram's Plug-In City: a mode of physical assembly that had been left behind in the structure. Imagine some legendary construction guild going around medieval Britain, building mysterious rural chapels using specially trained bees; their colonies could live on, long after the original architects were gone, and even help to maintain those structures for future generations. That was how this idea really began.

But then, when I mentioned a project that had been posted recently on the website of the Canadian Centre for Architecture up in Montreal, using the description "Bees Make Concrete Honey," everything just sort of crystallised and the idea grew from there.

Dan Howarth: How can bees be used as living 3D printers?

Geoff Manaugh: When you look at what is already happening in the worlds of bioengineering and synthetic biology, you see that animals bodies are already been trained, tweaked, or genetically altered to produce industrially useful substances. We thought, if goats can be made to produce weapons-grade spider silk by the US military and if silkworms can be guided by robots to weave architectural structures, then it didn't seem outrageous to suggest that bees could be genetically modified to produce a concrete-like adhesive substance, rather than just honey.

For example, there is already a species of bee native to New England that naturally produces a cellophane-like polymer that could, in theory, be used as an industrial alternative to plastic, one that does not require the use of fossil fuels; and something as simple as a special dietary regime for silkworms resulted in naturally dyed silk, free from industrial inks or colouring. It was examples like these — and there are dozens — that inspired us and kept the idea moving forward.

However, I should point out that our goal with this story is not to suggest that someone actually do this, or to advocate that we start genetically modifying the world's honeybees without any concern for ethics or even biosafety; in fact, our project specifically includes some of the obviously bad side-effects of doing this. Our goal was simply to illustrate the spatial or architectural possibilities that would emerge from something like this. It is — at least for the time being — a purely fictional scenario.

Dan Howarth: How would you get the insects to print what you want?

Geoff Manaugh: If you recall the Dewar's project in which bees "3B-printed" a whiskey bottle after being housed inside a structured mould, you can picture the same sort of set-up we imagined but on an architectural scale. The basic idea is that the bees would be temporarily enclosed inside moulds, scaffolds, or other detailed formwork, and that they would effectively build the shape from within using depositional manufacturing. In other words, they would 3D-print sculptural forms and architectural ornament into existence through the help of geometric formwork.

In the images, we show them doing this to the iconic stone lions outside of the New York Public Library. You could encase a statue, part of a wall needing some repairs, or even an entire building for a few days or weeks, and the only sign of the repair work going on inside would be the constant drone of bees buzzing away behind the formwork. Then you remove the frame, collect the bees, and their work is finally ready for public exposure.

Dan Howarth: What would they be able to create?

Geoff Manaugh: The ultimate goal would be to produce entire, free-standing architectural forms, but, in the meantime, the bees would be able to construct or repair statuary, architectural ornament, building details, and more.

Dan Howarth: How much concrete could one bee produce during its lifetime?

Geoff Manaugh: Astonishingly, the average honeybee produces less than 10 grams of honey over the course of its entire lifetime, so increasing that yield would be pretty important!

Dan Howarth: What would happen if they escaped into the wild?

Geoff Manaugh: First of all, that sort of escape seems all but inevitable; toying with species, even to produce something as seemingly mundane as better golf course grass, almost unavoidably has consequences on real-world ecosystems. Even household gardens of the 19th century led to the escape of imported plants that now grow wild throughout Britain as invasive species. Just imagine trying to keep these bees contained, and to prevent them from interbreeding with other species.

But what would an escape like this actually look like? At first, we thought, it would be fairly subtle: you'd see things like excess concrete ornamentation appearing on the sides of buildings or hanging from streetlights around the city. But then it would gradually become both stranger and more insidious. You'd start seeing odd concrete lumps placed seemingly at random around the city, blocking storm drains or interfering with sidewalks; but gardens and parks would then become affected. Plants and flowers visited by the bees would become weighed down with their concrete, succumbing to this inadvertent vandalism and resulting in landscapes like something out of J.G. Ballard's novel The Crystal World. The bees and their unearthly concrete forms would proliferate, interfering with car engines, industrial machinery, and even the windows, porches, and doors of houses.

You could think of it as a world infested with rogue 3D-printers or concrete glue guns gone wild. Putting the genie back in the bottle, so to speak, and regaining control of that situation would be a challenge.

Dan Howarth: What benefits or drawbacks does natural printing have compared to synthetic 3D printing?

Geoff Manaugh: The notion that we could abandon industrial dyes, fossil fuels, artificial adhesives, and other toxic, carcinogenic, or environmentally damaging materials and, instead, work humanely with the bodies of animals to produce viable alternatives is actually an enormously exciting possibility. It combines synthetic biology with biomimetics, and suggests that the future of industrial production might someday be visually indistinguishable from a rain forest, coral reef, or garden.

However, doing this humanely — ethically and morally — needs to be emphasised very strongly and cannot be overlooked. Living creatures are not just an industrial resource for humans to use and exploit, turning them into 3D printheads on a whim. This is another reason why our idea of printing architecture using genetically modified bees is presented as the plot of a fictional story, not as an actual biological design proposal for 3M or BASF to consider investing in.