Over 300 mirrored flaps are lifted up and down by the breeze to animate the facade of this seaside structure in La Grande Motte, France, by NAS Architecture (+ slideshow).

Named Breath Box, the waterfront pavilion was designed by Montpellier studio NAS Architecture as part of the Festival des Architecture Vives – a French architecture festival that takes place every summer. 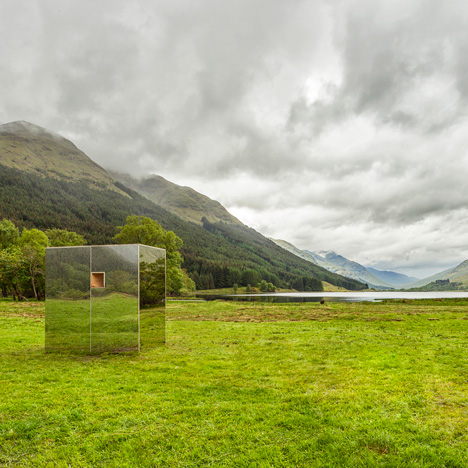 "La Grande Motte is a city with lots of wind, but instead of taking it as a constraint, we wanted to use this natural element to change the vision of the site," they told Dezeen.

The team build a rectilinear cabin with a sea-facing facade made up of 345 plates of polished steel. Each one is fixed to the structure on a hinge, allowing both visitors and the wind to lift up different sections.

"These mirrors reflect the horizon but in a distorted way," said the designers. "They draw an abstract picture of the city and the sea by a simple system, where a deformation is created randomly by the different natural conditions across the day."

"Inside, visitors see a reflection of themselves that changes with the wind and sometimes lets the sea appear behind," they added.

The structure of the pavilion was built from fir, which was charred with a blowtorch and varnished to create a blackened surface that protects it from the elements.

There is no rear wall, encouraging people passing by to come inside and interact with the panels. According to the designer, each creates a subtle noise as it drops.

Breath Box was one of seven installations created for the La Grande Motte section of the Festival des Architecture Vives – now in its second year – under the theme "sensuality".

"The theme 'sensuality' can be interpreted in different ways – mixing physical sensuality and reinterpretation of the five senses," the designers told Dezeen.

The festival also takes place in Montpellier, within the courtyards of the historic city centre.

Photography is by Paul Kozlowski.