Japanese architect Hiroyuki Tanaka has inserted a series of white boxes to house rooms within the concrete skeleton of this Tokyo house (+ slideshow).

Hiroyuki Tanaka Architects – whose past projects include a Tokyo apartment with diagonal walls and a table based on ancient temples  – renovated House in Yutenji for a young couple who had acquired the building in an abandoned state.

The architect created rooms and blocks of storage from plasterboard boxes that don't reach the ceiling, allowing the residents to utilise the spaces on top. 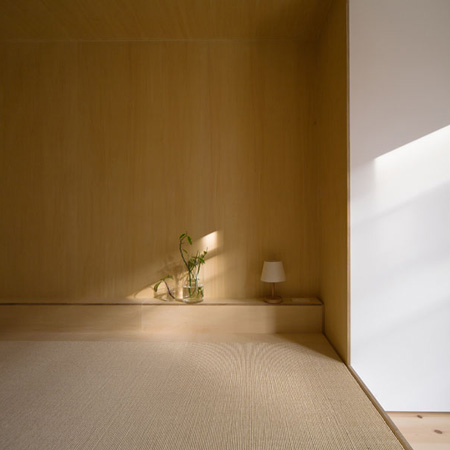 "The couple living here pass between the boxes, sleeping in the box, climbing the box to go up to the loft," Tanaka told Dezeen.

The largest box contains the bedroom, which is accessed from an entrance hall where residents store shoes and bicycles.

The room contains only a bed, with a platform on one side creating a reading space beside a window that looks onto the street.

Steps up through an opening on the other side of the room ascend to the raised living area. A wooden ladder also allows the residents to clamber on top of the room and use the leftover space.

Opposite the bedroom in another white box sits the bathroom, featuring a large window that brings in light through the street-facing facade.

A corridor leads straight from the front door and up two steps, passing between the white volumes to an open-plan living and kitchen area at the back of the building.

The dark wood and stainless steel kitchen sits against a wall lined with white tiles, on one side of the bedroom.

Rough concrete walls are painted white to a certain height, then left exposed at the top to match the chunky ceiling beams.

Scaffold boards cover the floor of the higher level and are used for the tops of a dining table and bench.

Another white box containing cupboards hides the laundry area, positioned in front of the bathroom.

Photography is by Shimizu Ken.