Cloud Arch by Junya Ishigami will act as a gateway to a newly pedestrianised section of George Street, outside Sydney Town Hall in the city centre. The ribbon-like structure will be made of painted steel plates that taper and curve in two directions. 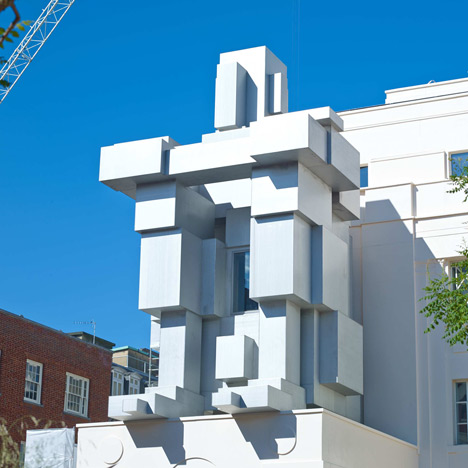 "The Cloud evokes comfort, openness and freedom," said Ishigami in a statement about the project. "Through freedom, it is connected to cloud computing which, in turn, links to the quality of 'Connected City' so important to Sydney."

The sculpture will be installed as part of a wider light rail project to introduce a new public transport system into the heart of the city's Central Business District (CBD).

Hany Armanious' Pavilion – a giant 42:1 scale model of an Australian milk crate – will also be installed as part of the same CBD rail project. The 13.7-metre-high blue structure will occupy a site in Belmore Park.

"At such a scale, Pavilion assumes the authority and majestic beauty of a gothic cathedral or Greek temple, while remaining intrinsically contemporary, speaking to the built environment in surprising ways," said Armanious.

"This is a bold interpretation of a public meeting space, a pavilion for all, a place for contemplation and repose, but also performance, community gatherings, and ceremony."

Tracey Emin's artwork is called The Distance of Your Heart and will consist of 60 bronze bird sculptures perching on poles and above existing doorways along Bridge Street, Grosvenor Street and the Kent Street underpass.

Each sculpture will be handmade by the artist, and her installation is expected to be complete before 2017 when the other two pieces are due to start on site.

Emin said that the work would be "simple, straightforward and accessible to everybody".

The three projects were selected from almost 700 expressions of interest for the first phase of the City Centre Public Art Plan – a AUS$9.3 billion (£5.149 billion), 10 year programme to introduce permanent and temporary artworks into the city.

The programme is part of the city's AUS$220 million (£121.8 million) contribution to the New South Wales' government's light rail project, which includes a new railway and pedestrian spaces.

"The aim is to transform the city centre with a legacy of art that possesses a gravitas and landmark quality equivalent to that of our great civic buildings and spaces," said the city in its Public Art Plan statement.

"The process of transforming the city through public art provides the opportunity to make the city more legible and easier to navigate. The intention is to address the public spaces along George Street and the east-west connectors, and in the squares and the lanes – to realise their latent potential, rather than resorting to meaningless gestures and objects."

The project feeds into a wider strategy to make the city centre more accessible, using recommendations drawn up by Danish architect Jan Gehl, as well as Sydney's official Public Art Strategy, unveiled in 2011.

But Armanious' project has already caused controversy, after another Australian artist tweeted an image of a similar object he produced in 2005.

Neither party has commented further, but the original designer of the milk crate, 89-year-old Geoff Milton, told Australian newspaper The Age that he was "laughing his head off" about the dispute.

"I don't see the artistic merit even now," said Milton. "It was purely utilitarian."