Inblum Architects spilt the interior of Wix's offices in two, with space for 32 desks to one side of the arched brick entrance and eight desks to the other. "The space had to be fitted out in two stages, keeping in mind the company's growing needs," said the architects. 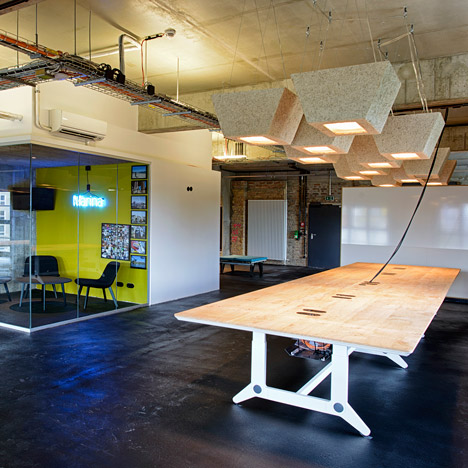 These areas are separated by three transparent meeting rooms, each a different size and featuring brightly coloured curtains to screen them off from the rest of the office.

The rooms have spaces between them to make it easier for employees to move between the zones and to create informal meeting places in between the blocks.

A suspended wooden ceiling links the three cubes, creating a flat surface for the top of the boxes to meet.

In the larger of the two workspaces, wooden desks are arranged in lines with upholstered blue seating positioned between them and the windows.

Matching seat-shaped cushions are placed on the sills of the larger windows, making the niches more comfortable to sit and work in.

The architects designed most of the furniture in the space, including drawer units on wheels that have a W shape punched out from each of the fronts.

Pyramid pendent lights hang from exposed concrete beams above the desks and the meeting room tables.

A kitchen and dining area off to one side is furnished with a table football table, colourful Daikanyama lights by Swedish brand Zero and a wall covered in tessellating triangular shelves.

"The idea behind triangular shelving units in the kitchen is to bring a personal touch to the space," said the architects. "Each company member shall bring a personal item, something that would represent him or his interests. Altogether, it will form a collective exhibition and say something about each person working in the company."

A mixture of exposed brick and white surfaces feature throughout the office, while a wall graphic by Artemij Brutov is located in front of the entrance.

Other recently completed offices for technology companies include the new colourful headquarters for Beats by Dre and a former brewery in Berlin converted into workspaces for Soundcloud.

Photography is by Darius Petrulaitis.