The Japanese architect has designed a new home for the Aspen Art Museum, his first permanent museum building in America. 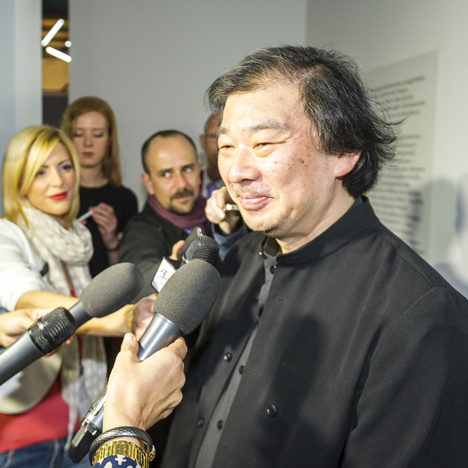 The new 3,000-square-metre building opened to members over the weekend and will open to the public on 9 August as part of the institution's 35th anniversary year celebrations. It occupies a site at the corner of East Hyman Avenue in downtown Aspen.

Woven wooden cladding made from Prodema, a composite of resin and paper sandwiched inside wood veneer, wraps around two sides to create a permeable facade and is echoed in the building's wooden roof structure.

A triple-level grand stairway between the exterior screen and the interior of the building is divided by a glass wall, creating a ten-foot-wide outdoor space and a six-foot-wide indoor space.

"In designing the Aspen Art Museum, I wanted to create a site-specific sequence that took into account the mountain views and the building's purpose as an art museum, and to open the building to the outside so visitors could appreciate the beauty of Aspen from inside the building," said Shigeru Ban.

Inside, the architect has included six galleries as well as a shop, on-site artist's apartment and education centre. In total, the building provides more than triple the exhibition space of the museum's previous facility.

"I made the entrance foyer on the rooftop," explained Ban. "It is like the experience of skiing — you go up to the top of a mountain, enjoy the view, and then slide down."

A large glass elevator in the north east corner also acts as a "moving room" within the building, connecting galleries across the building.

The museum's inaugural exhibitions include a show focusing on the work of artists David Hammons and Yves Klein, and Shigeru Ban: Humanatarian Architecture, which includes full-scale examples of the architect's projects.

Ban was announced as the recipient of the prestigious Pritzker Prize in March. He told Dezeen he intends to work on fewer projects following the award, which he received during a ceremony in June. See a roundup of his key projects.

Photography is by Billy Farrell, unless otherwise stated.