A visitor centre designed by local firm Maber Architects in Leicester, England, includes a glass floor that provides views of a 3D-printed replica of the remains of notorious English king Richard III on the spot where his bones were discovered (+ slideshow).

An original Victorian schoolhouse beside the site of the former medieval Greyfriars church has been converted into a new information centre, with an extension featuring a glass covered section to the rear covering the site where Richard III's bones were discovered in a car park. 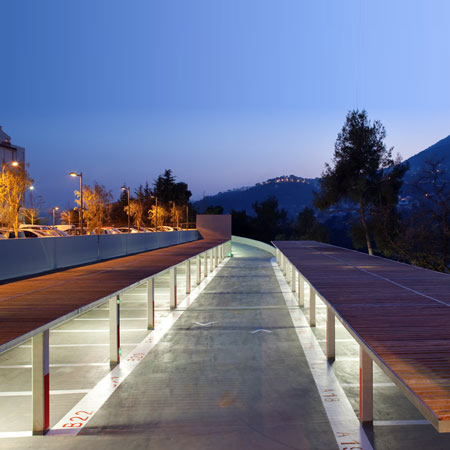 Exhibition spaces designed by Studio MB featuring displays and artefacts tell the story of "The King on the Car-Park". Displays are dedicated to the King's dynasty, death and discovery underneath a car park that covered the remains of the medieval Greyfriars Church building.

The two-storey refurbished Victorian building in the centre of the city also includes a cafe and function rooms and a viewing point to offer an elevated view of the grave site.

The architects used materials from the original Greyfriars site to inform their choice of stone and wood in the single level extension.

A standing-seam distressed brass cladding was used on the roof, which is visible from the Victorian building and is supported almost entirely by structural glass.

Limestone from a quarry 25 miles outside Leicester was used for the walls of the structure, alongside other local materials including English green oak, which has been left exposed on internal supporting buttresses and beams, and stone sourced from Derbyshire for the floor.

Brass was also used to finish the ceiling and door in the room that houses the grave where Richard was unceremoniously buried after his defeat at the Battle of Bosworth Field in 1485. His bones were discovered during an excavation on the site in 2012, and will be reburied in Leicester Cathedral in March 2015. A 3D replica of the skeleton has been printed in a white plastic material to display in the grave.

A number of openings were designed to replicate original views from the medieval church, and an existing oriel bay window in the Victorian building has been replaced with a glass viewing window, to visually link visitors of the centre to the Norman-era St Martin's Cathedral opposite.

The creation of a new boundary feature wall that reaches out from the extension is hoped by the designers to draw in visitors from the Cathedral.

"The overriding objective is to create a welcoming visitor attraction that will enhance tourism for the City of Leicester," said Maber architects.

It is hoped that the centre will attract 100,000 visitors a year.