This ceramic lamp by Italian designer Federica Bubani comprises a cone-shaped shade that fits inside a larger base in a variety of positions.

Federica Bubani designed the light so the upper, smaller cone containing a fluorescent light bulb sits within or on top of a lower, larger base. Its position determines the direction and brightness of the light. 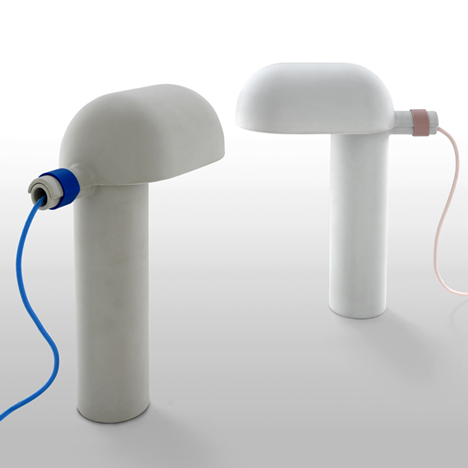 Created for lighting brand Fabbian, the table light is named Mia – the Italian word for "mine" – to communicate the extent to which the user can customise and control it, making it their own.

By arranging the top cone in different positions, the light can be either direct or indirect with varying degrees of intensity, depending on the gap left between the two cones for the light to shine through.

"Mia was born of a little game, a game of shapes," Bubani told Dezeen. "The cone is the ideal form for the light – it is simple, sweet, and makes you want the light to go out slowly. In this case, with two cones, the results are even more beautiful."

The inside of both translucent ceramic forms has been glazed for aesthetic qualities, but also to reflect the light.

"Ceramic is one of my favourite materials since I studied it, so I know it well," said Bubani. "It has a lot of potential."

Federica Bubani opened her own studio in 2003 and has studied new techniques and materials ever since, dedicating much of her time to ceramics research. In 2012 she won the Opendesign award with her Nordic Lamp.

Other ceramic lamps we've featured include Benjamin Hubert's two-part design held together with a silicon band and a light with a gaping cavity in its side.