News: a Dutch firm specialising in floating structures has unveiled plans for a hotel shaped like a snowflake with a glass roof so that guests can watch the Northern Lights while bobbing off the coast of Tromso in Norway.

The design for the 86-room Krystall Hotel by Waterstudio has been proposed for an undisclosed site off the coast of Norway by developers Dutch Docklands International – who only build floating developments – and a group of Norwegian entrepreneurs. 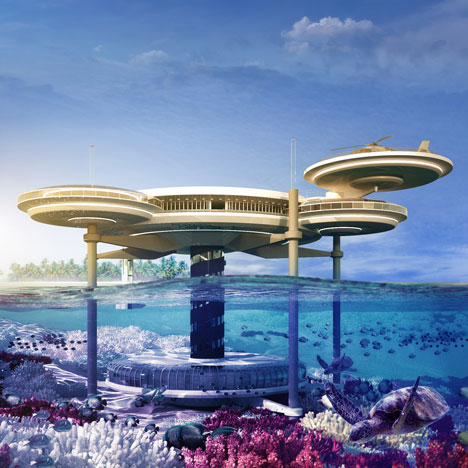 The floating structure, which will be built in pieces in dry docks before being assembled on location, is shaped like a snowflake and will be accessed only via boat.

"Different to any vessel, this hotel is floating real estate and will not move," said Dutch architect and Waterstudio founder Koen Olthuis.

"The floating basis is very big and because of that also very stable," added Olthuis. "You will not notice any movement. The shape provides most of the stability but additional technology with dampers, springs and cables is used to take away any acceleration."

The architect added that the design aimed to create the same look and feel as a luxury hotel on land, complete with a wellness centre and spa and conference rooms.

"Key for the design was that it should be a simple glass building that would allow the guests to get the most view on the Northern Light from their beds," explained Olthuis.

"The Northern Light is the main feature for the hotel. Without the light we would not have chosen this location on water. It is far enough away from disturbing city lights," he said.

Construction is expected to cost around 15 per cent more than the equivalent project would amount to on land, although the team would not disclose the budget.

The final location is not being revealed until a full environmental impact assessment has been completed.

"Because it is floating we do not have any impact on that location," said Olthuis. "We call it a scarless development. If you take it away after 100 years or so it will not leave any physical footprint. That is the only way to bring developments to such a precious and beautiful marine environment."

"The environmental assessment study is for us the most important because we want to be absolutely scarless as that is the main driver behind our projects," he added.

The developers said that the hotel would be run by a "five star hotel operator" and open before Christmas 2016.