News: architecture firm RMJM has won a competition to design a landmark tower for Doumen, China, with plans for a 93-metre-high structure covered in scales (+ slideshow).

Proposed at the intersection of two rivers in Zhuhai, the Doumen Observation Tower was designed by RMJM's Shenzhen office to mimic the movement of water and aquatic life in the coastal city, sometimes known as the Chinese Riviera. 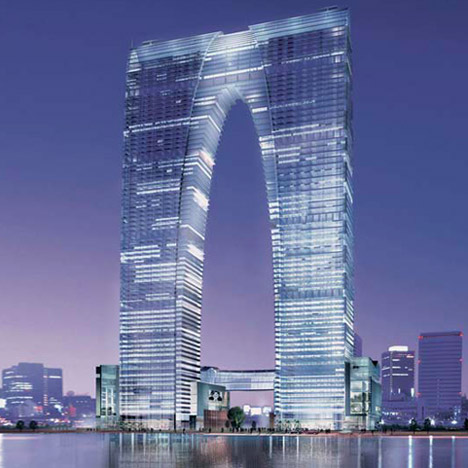 "The movement of water and fish can be seen as origin of the initial idea," said project architect Zhenyuan Yang. "The fish jumping gesture should symbolise the prosperity and rapid transformation of the city."

The tower's curving form will be clad with 1,400 bent panels, made from perforated aluminium. These will give the structure its scaly appearance, whilst shading the interior from direct sunlight.

RMJM used a parametric modelling system to develop the shape, which will be made up of twelve two-dimensional curves.

This will naturally divide the structure up into three sections – a ground-level podium housing shops and restaurants, a middle section containing leisure facilities, and a top-floor observation deck offering 360-degree views.

The tower is set to be delivered as part of the wider regeneration of Doumen's riverfront.