After 15 years of incremental work, architect Niall McLaughlin has restored and extended a London house with a subterranean gallery (+ slideshow).

Art and ceramics enthusiasts Penny Mason and Richard Sykes bought the Grade II-listed house in Islington, London to create space for their collection, and hired Niall McLaughlin Architects 15 years ago to restore and extend it on a room-by-room basis.

"The work was carried out in small sections as money became available to the client," Niall McLaughlin told Dezeen. 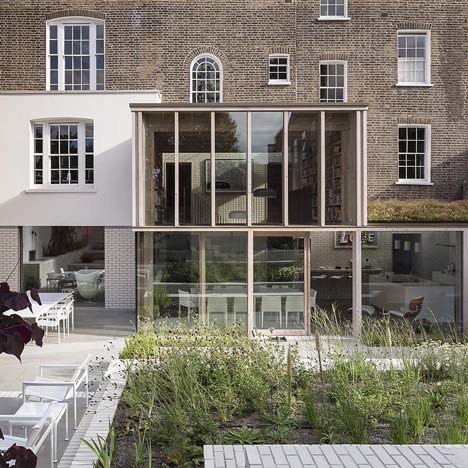 "They insisted on the highest quality. As art collectors it was important that the architectural concept was carried through as carefully as possible, whatever that took."

The completed project has now culminated with a subterranean gallery at the back of the garden, which the owners use for work, functions and small business meetings.

"The clients were looking for an architect who had a good understanding of their art collection, and had a sympathetic attitude to their existing building," explained McLaughlin, whose projects also include an elliptical chapel near Oxford.

"For the gallery, they wanted a quiet, different, modern space from which they could look back at the old house."

To connect the new gallery with the existing house, McLaughlin added a double-height screen running parallel to the garden's side wall. It encloses a tall passage between the two spaces, and has also been designed as a sculptural object in its own right.

"The screen is not simply a way of getting to the gallery, but a state in its own right. It is visible from the street above, from the house and from the garden and it's intended as a light collector," said the architect.

It features blocks of cast plaster set against a delicate sheet of translucent glass, which creates an inter-play between light, shadow and shape.

"The glass mutes direct sunlight as it comes through the blocks and the blocks appears as muffled white shapes behind the glass. The screen is intended to gather light from both sides and hold it on a single surface," explained McLaughlin.

The glass sheet also acts as a canvas for the changeable shadow from the neighbour's tree, creating constant movement on the surface.

An old doorway on the street-facing wall has been glazed to create a view through to the new addition, and the roof of the gallery has been designed to provide off-street parking.

Rooms in the existing house have been restored to their original simplicity, with Georgian detailing kept intact. They have also been adapted to showcase artworks and ceramics.

"We worked carefully on a room-by-room basis, discussing with the client the placement of each piece," said McLaughlin.

The five-storey house occupies a corner site. The main access is from a side street and leads to stairs in the centre of the plan. These bisect the house, creating place for a room at the front and back of each floor.

The basement contains a pair of offices, the ground floor has a kitchen and dining room, and the first floor accommodates a drawing room and library.

Bedrooms have been concentrated upstairs, with the master bedroom and bathroom on the first floor, and two guest rooms on the second floor.

New full-height joinery has been added to some rooms, and original timber floorboards have been kept throughout to maintain an unfussy feeling throughout the interior.

"After 15 years of incremental development the project is now complete," said McLaughlin. "The finished building remains loyal to the architect's original intentions despite the long gestation period."