A timber-clad box punctuated by narrow windows rests on top of a stone wall to form this extension to a municipal facility near Montpellier, France, by local architect Chrystelle Sanaa (+ slideshow).

The new facility accommodates the town's technical and urban planning services, which had previously been housed at a temporary workplace elsewhere. 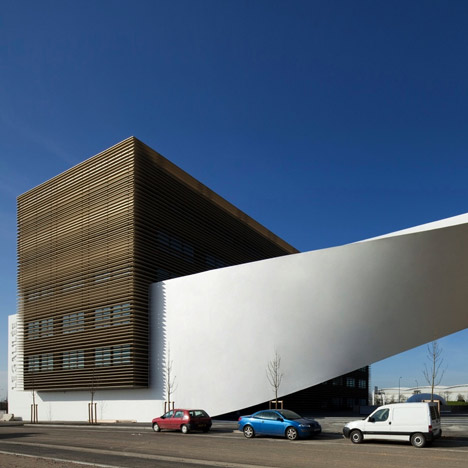 As a result of this, Chrystelle Sanaa was tasked with designing a building that could be erected quickly. She was also asked to come up with a design that is clearly distinguishable from the adjoining concrete structure.

She proposed a prefabricated wooden building that sits on a concrete foundation, which was constructed by a local carpenter in just seven months. The use of prefabricated timber also helped to reduce disruption on the busy site.

The plot flanks a major road and marks the entrance to the facility, so the architect added a stone feature wall facing the access road, referencing the vine terraces typically found in the Montpellier region.

A canopy that cantilevers from two edges of the building is lined on its underside with the same spruce cladding as the facades.

The narrow windows punctuating the exterior can be covered by sliding across wooden shutters, preventing direct sunlight reaching the interior.

The ground floor of the building is open to the public and contains a reception area, offices and a connecting passage to the adjacent building.

The two upper storeys house the offices and workspaces, with bold graphics applied to the walls and doors to aid navigation.

Photography is by Marie-Caroline Lucat.