This house in Oxford, England, by Waind Gohil Architects mirrors the style and shape of older terraced houses on its street, but features a pared-back design to distinguish it as a contemporary addition (+ slideshow).

"While the form of the house reflects the  scale of adjacent buildings, a limited palette  of materials is seamlessly detailed to complement the house's simple form and re-interpret the vernacular," said architect John Ashton. 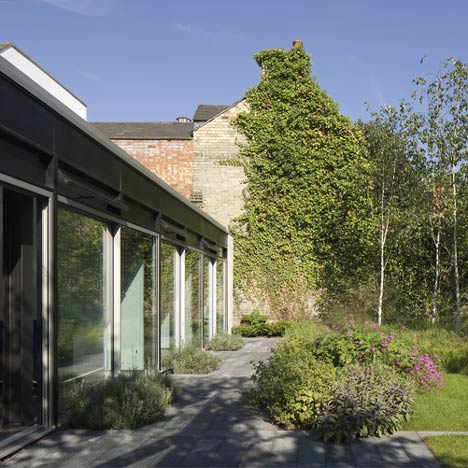 The residence was built for landscape and garden designer Angus Thompson and his family, and replaces an industrial building that had been used for making sheds.

To overcome the twin challenges of a limited budget and narrow 5.5-metre-wide site, the house was built with a prefabricated timber-framed structure, which was built off-site and craned in from the street.

This prefabricated structure also allowed for greater precision in the design, which includes a gap between the front elevation and the roof to conceal the drainage.

"Typical eaves details were designed out to create a crisp box, devoid of the typical unattractive clutter of downpipes," Ashton told Dezeen.

Rough-sawn oak cladding has been left untreated so that it will weather as the garden matures, while the upper level of the front facade has been clad in cement-particle board, chosen for its affordability.

The three-storey house has a family room at the front of the ground floor, and an open-plan kitchen, dining and living room at the back, which protrudes into the garden and is topped with a 3.5-square-metre skylight to bring light deeper into the long space.

The cooker has been centralised in the kitchen to maximise storage space along the side wall, and oak flooring has been added to give the room a rustic quality.

"The client was very clear that they wanted a modern, open, light space. Having moved from London, they wanted to fully embrace living in a more rural context," said Ashton.

The family's three children have a bedroom each and a shared bathroom on the first floor, while the parents have a master bedroom, bathroom, walk-through closet and study on the third floor, built into the pitch of the roof.

"The narrow plot dictated a linear sequence of spaces from front to back. This is fine on the ground floor, but on the first floor it meant cranking some of the partitions to the bedrooms to fit them in," said Ashton.

A skylight has been added to the south-facing slope of the roof above the stairwell to ensure the middle of the house gets natural light throughout the day.

Angus Thompson designed the garden and added a wildflower grass roof to the section of the ground floor that extends beyond the rest of the house, offering a more pleasant view from the floors above.

Waind Gohil Architects placed windows around the house to capture views of these green spaces.

"The wildflower grass roof offers a reference to the garden from well within the property, and it works. The grass is very long and can be seen through many windows and roof lights, offering a sense of intrigue when viewed from various places within the house," said Ashton.

A separate building at the back of the garden has been designed as an office for Thompson. It is also clad in cement-particle board and has been covered with a wildflower grass roof.

The front of the house has been set back from the street to accommodate a requirement from the local authority, which demanded it have parking space.

"Rather than maintain the line of the street's terrace and incorporate a garage, we pushed the house back to provide off-street parking," said Ashton. "The added benefit of this is that it brings extra privacy and an amenity area to the front of the house."

Energy efficiency was a core aspect of the brief, so the architects added efficient glazing, high-performance insulation, and a mechanical ventilation heat recovery system, which helps modulate the indoor temperature by extracting warmth from stale air leaving the house and adding it to fresher air coming in.

Photography is by Anthony Coleman.