Two angular skylights funnel daylight into a kitchen and dining area at the rear of this renovated house in Sydney by local office Carter Williamson Architects.

The clients asked Carter Williamson Architects to brighten the interior of a formerly dingy space at one end of their elongated south-facing property in the city's Annandale neighbourhood. 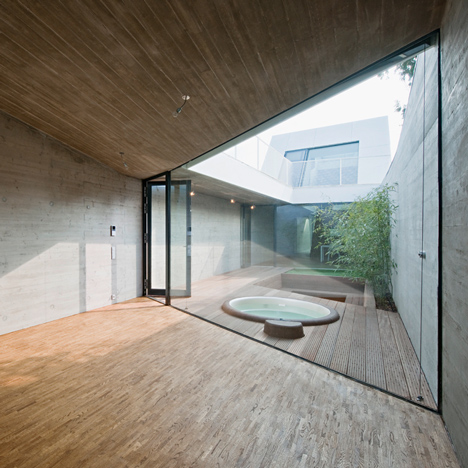 "When our clients approached us they had surrounded themselves with contemporary artworks of all forms and beautiful personal photographs from their travels, but it was hard to see anything inside the gloomy little rooms of their existing home," said the architects.

The slope of the roof is shallower on its southern edge to prevent it from blocking daylight reaching the windows of the neighbouring property, while the skylights are angled to capture the northern light.

Inside the kitchen and dining space of Light Cannon House, the new roof creates a dramatic steepled ceiling supported by timber beams.

As the brief for the renovation focused on introducing light into the property rather than increasing its physical size, just 22 square metres of floor space was added to improve the functionality of the existing rooms.

A bedroom at the front of the house was retained and the living area in the single-storey structure beyond was extended out to the boundaries of the plot, utilising space previously occupied by a neglected passage.

The living room is visually connected to the new kitchen through a small glass-walled courtyard that also helps to increase the amount of daylight reaching both spaces.

Sliding windows in the wall facing the kitchen can be opened to increase natural ventilation and create an open-air window seat.

A glazed panel in the rear wall at the end of the dining area can be swung outward to connect this space with the decked courtyard beyond.

The majority of internal surfaces are painted white to emphasise the brightness of the spaces. Black kitchen units provide a strong contrast that was influenced by the "clinical palette" favoured by the clients, who are both doctors of chemistry.

"They introduced us to the biological phenomenon of 'chirality' – the concept that explains why the asymmetrical light cannon roof form is pleasing to the eye," said the architects.

The walls of the dining room display remnants of an old fireplace, with the irregular brick surface now whitewashed and surrounded by the family's collection of artworks.

A storage space above the living room and ground floor bedroom has been enlarged to transform it into a master bedroom with an en-suite bathroom and a window overlooking the new sculptural roof.

Photography is by Katherine Lu.