News: a spindly bus stop created by Japanese architect Sou Fujimoto in Krumbach, Austria, has been unexpectedly closed to the public because it doesn't "follow the Austrian regulations for building safety".

Bränden bus stop, one of seven architect-designed shelters created in the tiny Austrian village, comprises a cluster of slender steel rods that support a winding wooden staircase and balcony.

But images circulating on social media this week show a chain barrier that now blocks access to the stairs, featuring a sign that reads "This is a work of art. Do not enter."

Dezeen understands that the sign was added after an intervention by local police.

Sou Fujimoto – the architect behind the 2013 Serpentine Gallery Pavilion – designed the structure as part of the Kultur Krumbach initiative.

Curated by Dietmar Steiner, director of Vienna architecture museum Architekturzentrum Wien, the project was developed to promote tourism in the picturesque Bregenzerwald district. 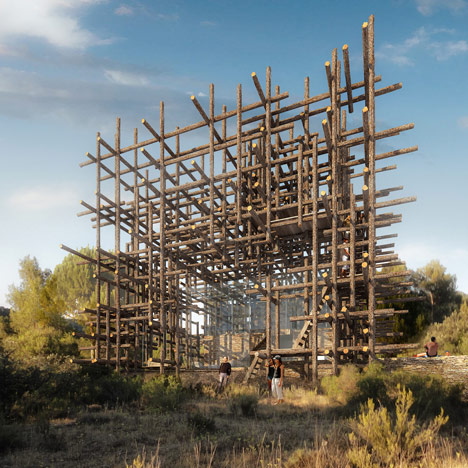 According to Steiner, the new safety warning is just a precaution and can be ignored.

"It's about the liability for possible accidents. The village cannot take over the responsibility for this because the construction – the stairs and the railings – do not follow the Austrian regulations for building safety," he told Dezeen.

"For Kultur Krumbach it was more important to follow the idea and concept of Sou Fujimoto as perfectly as possible, instead of following the Austrian regulations."

"But for sure, everybody can climb up the stairs by ignoring the sign. The construction is stable enough to allow it," he said.

According to Dezeen's sources, most people visiting the structure since the sign was added have ignored it.

Photography is by Hufton + Crow, apart from where otherwise indicated.