Architect Sou Fujimoto has revealed the design for a community centre topped with a bowl-like roof in the town of Hida, Japan.

Named the Hida Furukawa Station Eastern Development, the multi-purpose building will be located alongside the main railway station in the town in the mountainous Gifu Prefecture.

Sou Fujimoto Architects has designed the 21,300-square-metre building to contain shops, a spa and exhibition spaces, alongside research facilities for a local university, student accommodation and an all-weather playing field.

These various functions will be covered by a large circular roof structure that resembles the shape of a bowl, supported on slender white columns.

"The development is a vast landscape symbolizing Hida's past and future, its main plaza taking the shape of a bowl, or vessel, in Japanese called utsuwa," said the studio.

"The unique architectural space will give visitors a better awareness of the majestic nature of Hida."

The building's various units will be arranged around its edge, encircling a central plaza positioned where the roof dips to meet the ground.

Punctuated with numerous circular openings, the roof will double as a walkable grass-covered park. 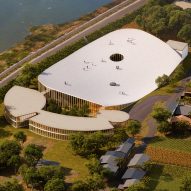 "The utsuwa is a shed-like roof over crisscrossing paths, inspired by Hida's traditional townscapes," said the studio. "It will be a destination that it is fun to walk through."

"The paths continue to the rooftop where people will go, drawn by their vision of the sky," it continued.

Established by Fujimoto in 2000, Sou Fujimoto Architects is one of Japan's best-known architecture studios.

Along with the cultural centre, it is designing a second building in the town of Hida that also has a walkable roof and will house Hida Takayama University.

Another recent project by the studio is the House of Music in Budapest, which is topped with a large rounded roof similar to those featured in the pair of projects in Hida.