Swivelling pods allow the owners of this house in Tehran to adapt to Iran's fluctuating temperatures by opening up rooms in summer, or turning them inwards during winter.

Designed by Tehran studio Next Office, Sharifi-ha House features three rooms that can be rotated 90 degrees to open up views and terraces during Iran's hot summers, and turned back to a horizontal position to keep the house warmer during the cold, snowy winters. 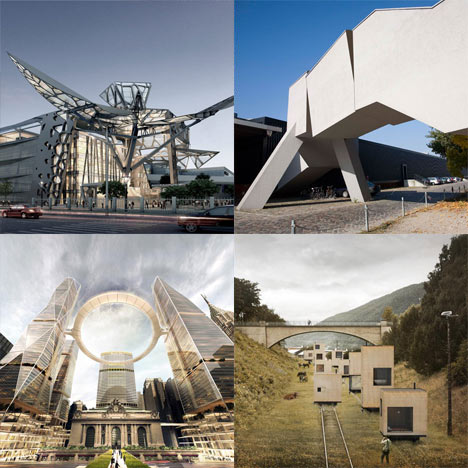 "The openness and closure of the building is a reference to traditional Iranian houses, which offer both a winter and a summer living room," said architect Alireza Taghaboni of Next Office, whose previous projects include a concrete house with a sweeping curved facade.

"Like many urban plots, this one had a noticeably narrow facade-width compared with its depth. Consequently, our expertise in transforming a two-dimensional facade to a three-dimensional one became indispensable," said Taghaboni, who redesigned plans 16 times for the client throughout the course of the project.

"The house adapts to the functional needs of its users," said Taghaboni. "The guest room can be reconfigured for different purposes. Similarly, the home office and breakfast room can change the formality of their appearance according to their residents' desires."

The motorised turntables that the pods rest on were made by Germany company Bumat, using a system that theatre sets and car exhibitions also rely on.

Terraces had to be designed with foldable balustrades that tilt up or down as the pods are being rotated, to accommodate the changeable facade.

Inside, rooms have been divided into two blocks – one at the front and one at the back – with a central void between them to ensure a good flow of light throughout the house when the rooms at the front facade are closed.

Bridges traverse the central void on all levels to connect rooms at the front and back, and internal balconies and windows around the void allow for views between the different rooms and floors.

Two basement levels are devoted to fitness and wellness, with a pool, sauna, gym and billiard table.

Above ground, a three-metre set-back creates space in front of the house for a shallow pool with a glass bottom, which brings dappled light down into the basement.

The ground floor contains a parking space and the housekeeper's quarters, while the next two floors accommodate communal spaces, with a kitchen, dining room and living space on the first floor, and a TV room and smaller kitchen on the second floor.

The dining area on the first floor has been sunken slightly and features wood flooring to visually set it apart from other areas in the open-plan space.

The main living area faces away from the front windows towards a wide-screen TV to create a cinema-like space, and features a recessed fireplace along the side wall.

The top two floors feature more private areas, with a master bedroom and bathroom on the fourth storey, as well as a kitchen and study, and three bedrooms and bathrooms on the fifth storey, which are arranged around a living room.

The house is named Sharifi-ha - which translates as Sharif's family - after the clients.

"This kind of naming is used for old Iranian mansions which had summer rooms and winter rooms," Taghaboni told Dezeen. "As we thought our project as the modern version of these, we named the house this way."

Photography is by Parham Taghioff unless otherwise stated.