Afteroom has designed new objects as well as versions of existing pieces in its range for Menu. 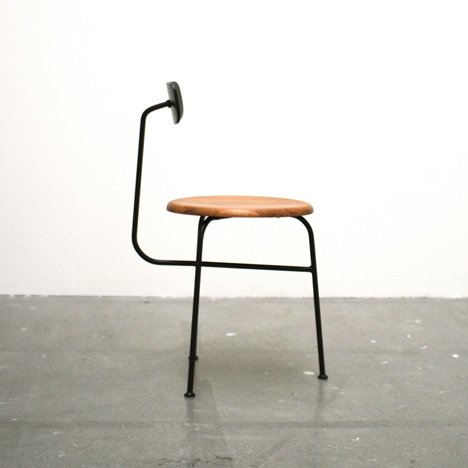 The Afteroom Barstool is adapted from the agency's Afteroom Chair, which was launched as the first seat in the Danish brand's collection in 2012 and updated in April.

Its four tubular steel legs are longer than the original design's three, but the original wood backrest that reaches out from beneath the seat remains the same.

The Afteroom Lounge Chair features steel arms that curve around to form a continuous backrest and leather upholstery.

The design merges elements of two iconic pieces of modernist design: the Thonet bent-wood armchair and the Spanish chair by Børge Mogensen.

"We really love Bauhaus and Scandinavian modernism," the designers told Dezeen. "Modernism influences and inspires us the most, especially Scandinavia designers, like Alvar Aalto, Arne Jacobsen, Hans Wegner, llmari Tapiovaara and Greta Grossman. We are learning a lot from their works and thoughts."

Afteroom has also designed a coat hanger, which comprises a horizontal powder-coated aluminium bar with two large dot-shaped coat hooks on either end.

The central element is intersected by two vertical bars in the same style at different heights.

Wall fixings are hidden inside the frame to maintain the clean lines and the hanger is available in black or white.

The Afteroom Chair has also been created with a padded seat covered by Kvadrat fabric.

"We follow traditional production methods to choose materials and to try to do something nice," the designers said. "The collection has been made mostly by steel bending, die casting and welding, which were commonly used in Bauhaus modernism."

Menu will launch the collection at the Maison & Objet trade fair in Paris, which runs from 5 to 9 September. Images are courtesy of Menu A/S.