Belgian artists Studio Job have designed a collection of feline bronze pieces with lights instead of eyes for London's Carpenters Workshop Gallery (+ slideshow).

Studio Job based the Pussy Cats series of five pieces on their pets Paula and Jambe Blanche.

The black cats are made from brass, which is pattinated across the bodies and polished to form shiny teeth, paw pads and claws. 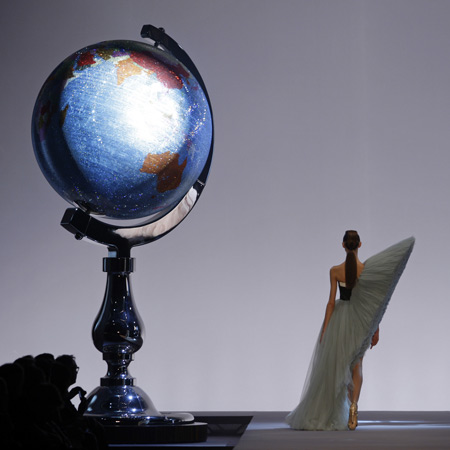 Black electrical cords extend out of from their bottoms to connect the lights in their eyes to a power source.

Cat Fight depicts one feline pouncing on another, with claws and teeth bared as they stare at each other with illuminated eyes.

"Cats can be quite ruthless," said studio founder Job Smeets. "I believe cats are, as we say, autistic to a certain extent as in they can't really connect into others' emotions."

Dezeen Book of Interviews: Job Smeets features in our new book, which is on sale now

Cat Attack, Cat Swipe and Cat Hiss are created in the same style, each depicting a single male cat in a different aggressive pose.

"Let's be honest: cats kill birds, butterflies, mice and sometimes a mole," Smeets said. "Yet at the same time they sleep in our bed. Some say cats are more closely related to humans than we assume."

The final sculpture is simply titled Black Cat, in which the animal is stood on all fours with its back arched and tail in the air.

Designed in 2013, this feline has the same polished bronze testicles that have to be pressed to illuminate the yellow lights in the eyes of all the cats.

"It's not every day you're asked to tickle a cat's testicles," said Studio Job.

Pussy Cats are on display at Carpenters Workshop Gallery in London's Mayfair district from 5 September to 3 October.

Photography is by A. Millot.