The largest sculpture ever created by Studio Job, The Embrace was based on the outline of the facade of KunstKerk, which is located in a former church in Dordrecht, the Netherlands.

"The architect, Andries Lugten, and the developer, Dudok, asked me to create something to help with their proposal for the redevelopment," Studio Job founder Job Smeets told Dezeen.

"So my idea was to use the back of the building, which was an unused space but had potential to be a connection between the art church and the art cinema."

Smeets hand-crafted the 13-metre-tall sculpture, described by the studio as a "surrealist take on classical church windows," from bronze and pigmented glass.

The final design features two undulating "windows" that seem to stretch towards each other above a smaller, central window.

Each is housed within the same large, textured bronze frame, which culminates in a decorative two-metre high cockerel sculpture at the top weighing 300 kilograms.

The choice to use bronze was based on the fact that the studio has often worked with the material, which Smeets said was also both completely durable and fully recyclable.

"The advantages of bronze is it's very pliable; you can do it in any shape and it's liquid so I can make any form," Smeets explained.

"Bronze is a significant part of my work; in my atelier, we do every step of the process from the natural form to the final polish and painting," he added.

"The bronze structure reminds me of the industrial metal casting and the industrial steel girders of old bridges. The final look I wanted to be a jewel in the city, something precious – maybe even an ornate jewelry box."

The bronze frame is held up by four hand-sculpted bronze tortoises on whose shells it rests.

These were designed in reference to an ancient Asian custom where a tortoise placed at the back of the house gives "protection and wisdom," according to the studio. 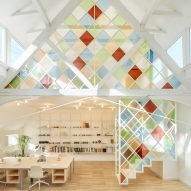 The glass windows set into the bronze face outwards, rather than inwards as church windows usually do.

The characters depicted are loosely based on those traditionally seen on stained-glass windows, but they have been given a modern update.

Among them is a figure that Smeets describes as "Jesus with a pinwheel being attacked by chickens", as well as a child with devil's horns based on Smeets' son.

"If you look at many churches you see constant references to devilish creatures, often seen in reliefs and sculpture, especially on the churches in Belgium – animals that are scary, maybe it's also to protect the building or to scare you, it’s a very classical idea in many cultures," Smeets said.

"So for me, he's a guardian of the building, he's also based on my son who has a devilish nature."

The idea behind the windows, which also feature rockets, bees, butterflies and a bomb, was for people to see more things the closer they look. To Smeets, the designs are a natural evolution of classic designs.

"The imagery is a family scene with modern elements integrated," he said."Church windows have always incorporated references of the time, this is no different."

Smeets hopes the building will become an eye-cathing landmark and the beginning of a new public square.

The sculpture was also deliberately designed to be appreciated from both the exterior and interior of the arts centre, where a cafe is located.

"From the inside, you get this multicolored detailed view and in the evening the building takes a new form and the windows glow from the inside, its really beautiful," Smeets said.

"I designed the windows to face outwards – church windows usually are only to be seen by the people inside, I wanted to make this for everyone outside," he added.

"Already when we were installing it, the neighbor came down to thank us for the new view of the two-metre high bronze chicken from his roof terrace."

Studio Job has previously designed stained-glass windows for an art centre in Buenos Aires and given its own Antwep headquarters a maximalist interior design.

The photography is by Jeroen Musch.