Italian illustrator Federico Babina has spliced 25 world-famous paintings, from artists including Picasso, Mondrian and Dalí, with buildings by the 20th century's most prolific architects.

Federico Babina, whose past projects include images of artworks transformed into buildings, developed this latest series of posters to create a dialogue between the most celebrated works of art and architecture. 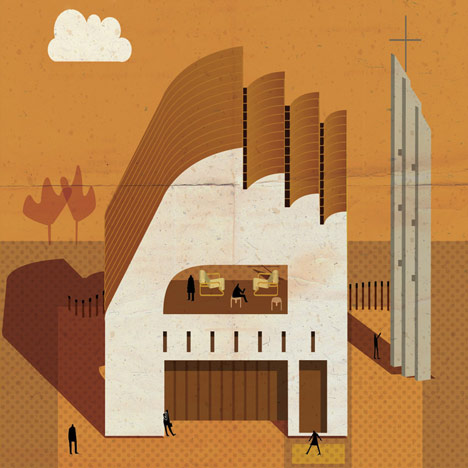 "The project's main idea is to reinterpret famous paintings using a brush soaked in architectural tints," said the artist.

"Celebrating a point of encounter and confrontation between the rigour of the architect and the artist's gesture, these images are a metaphor for an imagined and imaginary dialogue between creative minds," he said.

Pablo Picasso is paired with Le Corbusier for one of the illustrations, creating a representation of Guernica that replaces the iconic figures with images that include the architect's chapel of Notre Dame du Haut in Ronchamp and his Modulor figurine.

"I tried to find both possible and impossible encounters between artists and architects," Babina told Dezeen. "Some pairs have real relationships, while others are the result of an imaginative process."

"The idea was to carefully study the expressive language of an artist and read between the lines the hidden architecture in it, to find the probable and improbable connections between forms of expression and aesthetic languages," he explained.

The first image in the series is a mash-up of Joan Miró's Femmes et Oiseau dans la Nuit and the buildings of Japanese architect duo SANAA, which are reduced to narrow lines and blobs of colour.

A Bigger Splash by David Hockey is also reimagined, so that the Californian building with a swimming pool is now Richard Neutra's iconic Kaufmann House in Palm Springs.

"In these images the process is similar – at first glance, we can quickly recognise the artist, but by focusing on the details the architect also springs up," said Babina.

"The wires that connect and intertwine these relations can be thin and transparent, or robust and full-bodied," he added.

Other pairings in this collection include Mark Rothko and Ricardo Legorreta, Roy Lichtenstein and Will Alsop, and Georges Braque and Frank Gehry.