Israeli designer Lou Moria has used a vacuum-forming process to create pairs of plastic slippers that can be produced quickly and cheaply (+ slideshow).

Lou Moria designed a pair of shoes that could be created from a single piece of recyclable rubbery plastic in response to research on cheap shoes, which often comprise many different materials and are assembled as part of a long process. 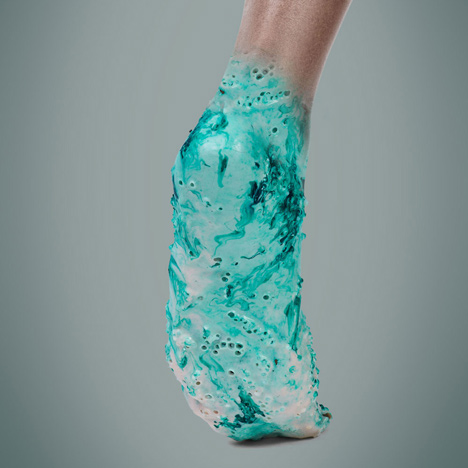 "In this model I tried to think about shoe manufacture and marketing in a different way," said Moria. "This shoe may not last long  – but so is the cheap one we can find in the market today – but it's being made in a few seconds from one material and technology and can easily be recycled as one piece."

The designer creates the shoes using vacuum forming technology. A plastic sheet is heated until it is soft and draped over a mould inside the forming machine.

A vacuum is used to suck the plastic into the shape of the mould, then the mould is removed after the plastic has cooled and firmed.

Once the shoes are shaped, the excess material around the sole needs to be cut away and the top has to be chopped off so the foot can slip inside.

"The shoe is also its own packaging and by opening it the user prepares it for use," said Moria.

Waste pieces of the material can be recycled and used to create more shoes, which are available in any colour.

A small hole formed at the top of the sole is included so the footwear can be hung up on shop displays.

The design is the fourth model in Moria's Last 21986 project, which focusses on alternative footwear production and user interaction.

Model 1 in the series is a pair made from multiple canvas layers that can be cut away when the shoe gets dirty or torn.