An irregular formation of geometric volumes and voids were designed by architecture firm Saraiva + Associados to break down the scale of this police headquarters building in Lisbon (+ slideshow).

The new facility for Portugal's criminal investigation police force – the Polícia Judiciária – covers a total area of 98,000 square metres and was designed by Saraiva + Associados to accommodate various departments under one roof. 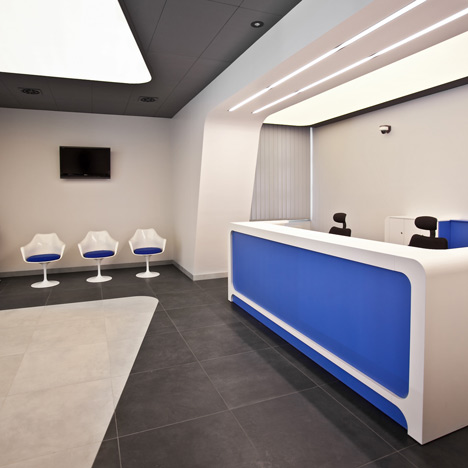 The headquarters is situated in a historically significant and heavily developed area of the Portuguese capital, so the architects took care to design a building that is broken up into different volumes to reduce its visual mass.

"The Polícia Judiciária is undoubtedly one of the most prestigious and emblematic institutions in Portugal," said architect Miguel Saraiva. "Although we associate rigour, discipline and austerity with this institution, its new headquarters has a corporate but humanised image, without an austere scale."

The neighbourhood was a border between Lisbon's historic centre and the surrounding rural areas until the late 19th century, but is now largely built up.

For the new structure, the architects opted for a modern combination of clean lines and monochrome details. Rectangular windows scattered across the various facades help to further disrupt the bulky appearance of the structure, while providing a consistent element that identifies the building on all sides.

"The geometric skin gives the new building a unified image, reducing its impact on the neighbourhood," added Saraiva.

Metal grilles fixed to some of the facades contain mesh that provides solar shading and casts a grid-like pattern that enhances the geometric aesthetic of the surfaces.

Walls featuring the same patterned window arrangements as the exterior surround the atrium, which is covered with a glass roof supported by metal trusses.

Black tiles separated by a grid of white mortar cover the floor and staircase, creating an inverted expression of the monochrome vertical surfaces.

A series of sheltered and exposed roof terraces face out across the surrounding rooftops, and many are lined with planted beds.

An auditorium lined with wooden panels has a more comfortable feel than many of the other spaces, with an undulating angular ceiling complementing the building's geometric aesthetic style.

Bringing the police force's services together in one building has enhanced its efficiency and reduced maintenance costs, with facilities including a rooftop helipad supplementing improved technology and safety features.