News: Zaha Hadid Architects has designed three residential towers to sit on a riverfront site in Brisbane, Australia, as part of a AUS$420 million development (+ slideshow).

"The design tapers each structure to minimise their footprint and open the riverfront to the public; creating a vibrant civic space for Toowong within a new riverside park," said Zaha Hadid in a statement. 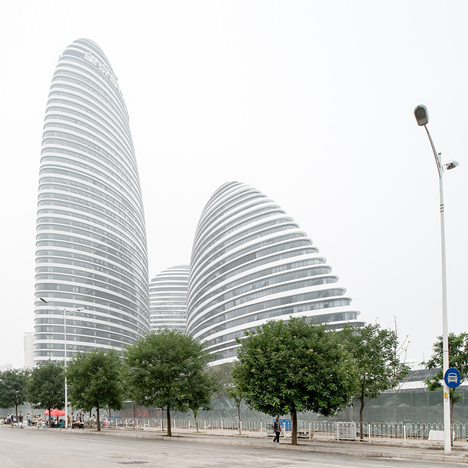 According to the developer, each of the towers will have a multi-layered facade design with a glazed curtain wall overlaid with a pattern created from glass reinforced concrete.

This pattern emulates organic petal shapes, creating a non-uniform lattice that becomes sparser at it moves up the building, eventually creating a cage-like structure towards the top.

Located on a strip of land four kilometres to the west of Brisbane's Central Business District, the project will also include 7,300 square metres of public park space, says developer Sunland Group.

The site for the project was formerly occupied by the headquarters of Australia's ABC Radio network, who sold it in 2006 after 17 women who had worked there were diagnosed with breast cancer linked to high radiation levels. It was declared free of contamination in 2010.

Demolition of the old ABC buildings will begin this month ahead of a community consultation process for the plans.

One of Brisbane's oldest residential buildings – a listed single-storey house called Middenbury that was built in the 1860s – occupies part of the area and will be preserved as part of the new development.