London-based Jamie Fobert Architects was commissioned to design the two-storey Luker House for engineer Henry Luker and his family, on a tightly constrained site in the village of Barnes. 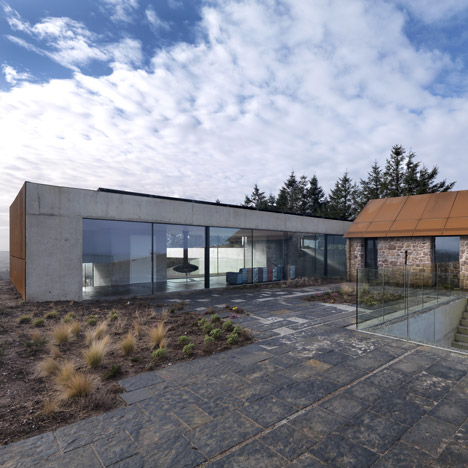 With no street-facing elevations, the vacant site had previously hosted a series of residential parking garages, so was hemmed in on all sides by existing houses and their back gardens. A narrow access road provided the only approach route.

"The house is a product of quite severe site constraints in terms of flood risk, privacy and daylight," said Fobert, who won the Manser Medal in 2003 for a house on an even more difficult site in central London.

The non-linear shape of the plot prompted Fobert to organise the structure along the northern boundary. This created a long narrow residence with a uniform facade of pale bricks, intended to resonate with the surrounding buildings.

"The two storey mass of the house hugs the rear boundary while single storey 'pavilion' elements extend into the site, enveloping a courtyard onto which all ground-floor living spaces open," said the architect.

Most of the entrance level is sunken down slightly below ground level – a detail included to give residents a little more privacy. Upon entering, a staircase leads immediately down to a large kitchen and dining space, with a living room just beyond.

These sunken areas, featuring a continuous poured-concrete floor, are also designed to "enhance the sequence of spaces experienced upon entering the house".

The floor steps back up again at the rear, leading up to an en suite guest bedroom, before ascending towards the three main bedrooms on the first floor.

To contrast with the overtly brick exterior, there is no exposed brickwork inside the building. Instead, white walls and simple furnishings are complemented by bronze elements that include staircase handrails and fenestration detailing.

A courtyard on the sunny southern side of the property sits at the same level as the living room, allowing residents to extend their activities outdoors during the warmer summer months.

A surface of Pennant stone was chosen to match the internal flooring, while a concrete retaining wall bounds the space. More greenery can also be found just beyond.

"As you move from the courtyard towards the back of the garden, the planting becomes more lush, relaxed and informal," added Fobert.

Luker House was named on the shortlist for the Manser Medal 2014 alongside a cliffside home on Scotland's Isle of Skye and an angular house extension in London. The winner will be announced next month.