London Design Festival 2014: Norwegian design studio Noidoi has designed a multipurpose daybed for contemporary living spaces that are taking on the merged roles of what would once have been separate rooms.

The solid oak daybed is covered with a Norwegian wool mattress, a section of which can be folded back, revealing an oak hatch covering a magazine rack below. When the hatch is removed, it can be used a serving tray. The mattress can also be removed and used independently of the daybed. 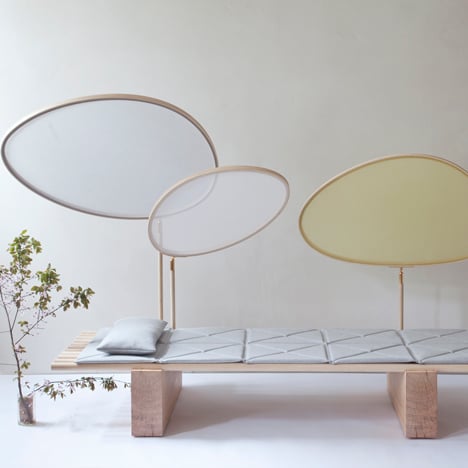 "The idea behind Pulse came after observing private spaces and how they are transforming into more multifunctional environments," Noidoi told Dezeen. "Inspired by this way of living, we came up with a piece of furniture that could adapt to different situations."

"Pulse is made by a simple and honest construction highlighting the craftsmanship and materials used," they said. "The solid oak gives a certain weight to the piece."

"For the mattress, we used Norwegian-produced wool and the magazine holder is laminated with the same type of wool. The materials are long-lasting and they have an attractive texture both for the eye and the hand."

Pulse was launched at Greenhouse, part of the Stockholm Furniture & Light Fair 2014 and will be making its UK debut at 100% Norway during London Design Festival, 13 – 21 September 2014.

Lønstad and Cioroiu founded their studio after they met while studying at The Royal Danish Academy of Fine Arts, School of Design, in Copenhagen.