Prolific Australian industrial designer Marc Newson has just joined Apple's design team, so here's everything you need to know about the designer – including previous collaborations with Jony Ive and his most popular projects on Dezeen.

Named one of Time magazine's "most influential" people in 2005, Newson has turned his hand to designing just about everything, ranging from plane interiors to furniture, jewellery and boats. He told Dezeen that his prolific output is fuelled by the fact that he is "obsessed by the idea of making things".

In a series of exclusive interviews, Newson described the early days of his career when he was forced to make some of his most well-known pieces as one-offs and limited-editions because he couldn't physically keep up with demand for his hand-made pieces.

"I was literally making things myself", said Newson. "I was doing everything from upholstery to machining to welding – you name it." 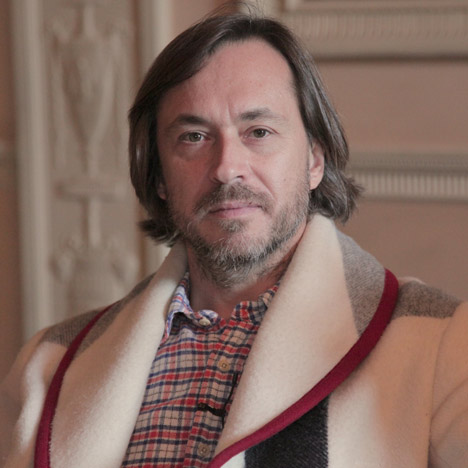 Newson applied some of the form-making principles he learnt studying sculpture and jewellery at the Sydney College of Art to his furniture creations.

His break-through design was the Lockheed Lounge chair, the fibreglass and aluminium chaise designed and hand-made by Newson, which featured in a Madonna video and in his first exhibition in 1986. Just 23 years later, it was sold for £1.1 million – a record-breaking auction price at the time for a piece of contemporary design art.

Newson has recently found significant success designing fashion and accessories – including ranges for denim label G-Star RAW with whom he celebrated his 10th anniversary this year. He was also one of the founders of watch brand Ikepod, leading to speculation that he'll be heavily involved in the design of Apple's much anticipated iWatch.

His friendship with Apple's head of design Jony Ive has already resulted in a number of collaborations including a one-off Leica camera, a pair of solid gold Apple headphones and an aluminium desk created for a charity auction at Sotheby's.

Speculation is rife that he has already been heavily involved with the design of both the iWatch and the iPhone 6 – both expected to be unveiled at the tech company's annual product launch tomorrow to which Apple has invited an unusually large number of fashion editors.

Newson has famously strong views about the relationships between different design disciplines. In one interview he accused the design industry of being  "really pathetic" and guilty of "terrible snobbery" towards the fashion industry. According to Newson, most collaborations between fashion houses and industrial designers fail thanks to this "snobbery".

Dezeen Book of Interviews: Marc Newson features in our new book, which is on sale now

In 2007, Newson designed a one-off nickel surfboard for pro-surfer Garrett McNamara, which was later purchased by the Gagosian Gallery for its permanent collection. His work also features in the collections of the Museum of Modern Art in New York, the Design Museum and V&A in London, the Centre Georges Pompidou in Paris and the Vitra Design Museum in Germany.

As well as turning his hand to designing sportswear, restaurant interiors and cabins for space ships, Newson currently holds the position of creative director at Qantas and has designed interiors for the airline.

Eight of the most popular Marc Newson projects on Dezeen:

A range of clothing featuring bold graphics for clothing brand G-Star RAW, including t-shirts, hooded jumpers and jackets with printed outlines in contrasting colours and metallic finishes. Find out more »

2. The (RED) Desk by Jonathan Ive and Marc Newson

Jonathan Ive and Marc Newson created this one-off thin aluminium desk, with a surface covered in a pattern of 185 interlocking cells. Find out more »

The K01 boasted the thinnest interchangeable lens in the world when it launched, and was compatible with all 214 types of lens in the Pentax range. Find out more »

5. The Hourglass by Marc Newson for Ikepod

This hourglass for watch brand Ikepod contained tiny gold-plated stainless steel balls instead of sand, that comes in two sizes – a ten minute or 60 minute timer. Find out more »

Based on German brand Leica's M camera, with buttons and dials sit in recessions on the top of the camera so they lie flush with the surface, and the shell is perforated to create a fine mesh. Find out more »

Made from aluminium and stainless steel, this pen created in collaboration with the fashion brand's artistic director Pierre-Alexis Dumas is opened and closed by twisting the body. Find out more »

Marc Newson designed the cabin (and, we suspect, had a hand in the exterior) of the Astrium space tourism jet, which was launched at the Paris airshow in 2007. Find out more »